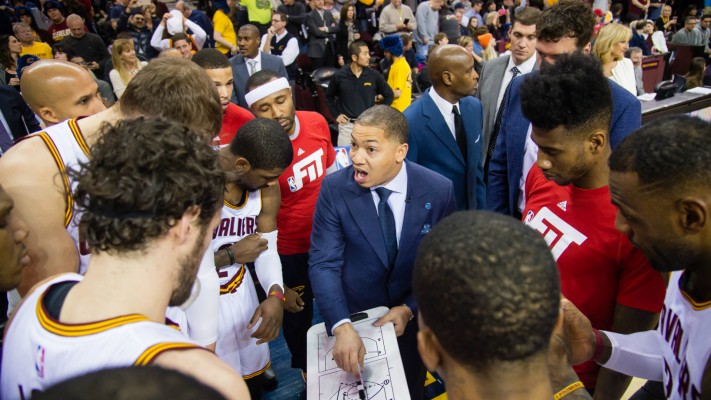 In a series of postgame remarks following the Cleveland Cavaliers’ victory over the San Antonio Spurs, LeBron James gave a strong endorsement of the efforts of the team’s new head coach, Tyronn Lue.

Whether or not that changes during the inevitable bumps in the road in the weeks and months ahead (especially during the postseason) remains to be seen. Yet James’ comments seemingly indicate that the team is fully behind Coach Lue in their quest for an NBA title.

“For us, Coach Lue is the captain. He’s the captain of the ship. We got to do whatever it takes, do whatever he barks out. And to see it coming to fruition out on the court definitely helps for sure, but it all starts with us,” James said. “He can only put us in position but we got to go out and execute and it’s great to have a leader like Coach and we go out and execute it offensively and defensively.”

Another instance came when discussing that the team’s shift to becoming more of a running team was something that James was on board with:

Lue’s prodding during practice and film sessions to implement this new strategy appears to have resonated with the team, which has now won four in a row:

“Coach gets on us in film sessions about timing and scoring time, (we) want fast shots,” James said. “We want to score, get good offense, if we don’t have something early in our transition game.”

Speaking about the victory over the Spurs specifically, James appeared to indicate that the team as a whole now has a more focused approach to their gameplan:

One of the biggest changes since Lue took over has been the emergence of Kevin Love as more of an offensive threat. Part of the reason, according to James, is a better understanding of the roles each player has on the court:

“I think Coach Lue has done a great job clearing the air of what he expects out of all of us, including Kev, and he’s a big focal point of our team,” James said.

In addition, the team also appears to have immediately embraced the instruction of new assistant coach Mike Longabardi, if James’ words are of any indication:

“Coach Lue, he wants us to defend but he’s not the voice of our defense. Coach Longo, he’s our defensive coordinator,” James said. “He gives us the game plan. Coach Lue definitely makes his inputs throughout the course of the game, if he wants to change on a game-to-game basis or throughout the game.”

With a 34-12 record, the Cavs continue to be atop the Eastern Conference standings. The win over San Antonio (albeit without Tim Duncan in the lineup) was an important victory, given the potential fact that the two teams might end up facing each other in the NBA Finals.

The fact that the victory came against an elite team can only help bolster Cleveland’s confidence, considering they’ve dropped both games this season against the Golden State Warriors and Chicago Bulls.

Being in sync with the coaching staff looks to be a newfound asset that the Cavaliers can build on for the remainder of the regular season, something that James has made clear through his comments.