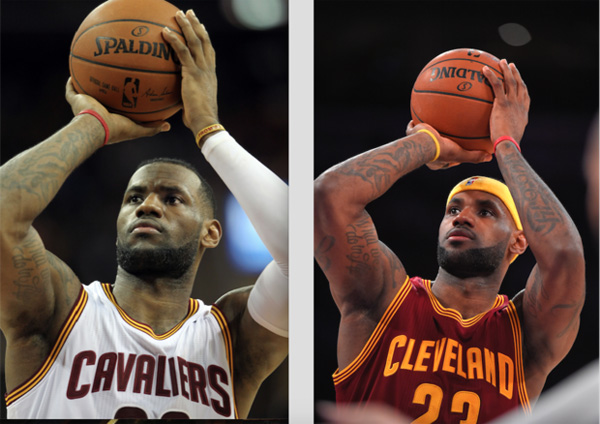 Despite this season being his 13th season in the NBA, the evolution of the foul shot for Cleveland Cavaliers’ forward LeBron James continues, with the latest version allowing him to hit at a 77.5 rate over the past 12 games.

An article by Joe Vardon of the Cleveland Plain Dealer described what went into the overall refined process. James now basically does this each time he heads to the line: spin the basketball from his right hand to his left hand and rock the left foot back. Then, he puts the ball in both hands and returns the left foot to shooting position. From there, he bends the knees, pausing either for a split second or for an extended delay before finally shooting.

Part of the reason for the attention to this often overlooked aspect of his game was that during this season’s first 10 games, James managed to connect at just a 60.5 rate. That stretch included hitting just 43.8 percent from the line during the first three contests. It was after the team’s eighth game that James decided to try his latest method.

James has generally been a consistent free throw shooter during his career, averaging 74.4 percent from the charity stripe. However, at certain points during that time, his seasonal average has hovered close to 70 percent, with his average since returning to the Cavaliers now at 71.0 percent.

During his first stint with the team, James was able to use what then-assistant coach Chris Jent taught him: to have three strong years of free throw shooting. One of those campaigns was James’ career-best 78.9 percent in 2008-09, when the Cavs won 66 games during the regular season.

Describing the mechanics, James went back to video from his days with the Miami Heat:

“I started watching film again when I shot the ball really well from the free-throw line three years ago when I was in Miami,” said James. “I was shooting like 85 percent for that four weeks and I looked very comfortable. I remembered it, I watched it on film and that’s what I went back to.”

Jent, who currently serves as head coach of Phoenix’s D-League team in Bakersfield, CA, saw a recent Cavalier game and noticed a change from what he had taught James:

“His shot has changed a great deal,” Jent said. “Maybe some things are for the better, I don’t know, but it’s different. The most important thing at the free-throw line or just with the game in general, you have to feel good about what you’re doing.”

While not discounting the potential for success, Jent was cautious:

“Confidence makes up for a lot of what ails you,” Jent said. “If that’s what ‘Bron wants to do (use a rocker step), and he is comfortable with it, there’s a chance for success. If he’s experimenting all the time, it’s going to be tough.”

One critic of James’ new method is Ed Palubinskas, who runs a basketball shot school in Louisiana and has worked with players such as Shaquille O’Neal and Dwight Howard, both of whom have struggled mightily at the foul line.

“Do you kick the ball? What’s the leg got to do with it? What’s the deal? Who taught him that rubbish?”

Offering his unsolicited suggestions, Palubinskas said that James should bend his knees less and that his knee movement be timed to the bend of the elbow during the shot.

Ultimately, teammates, coaches and fans won’t care what method James uses as long as his effort at the line doesn’t result in a loss down the road.