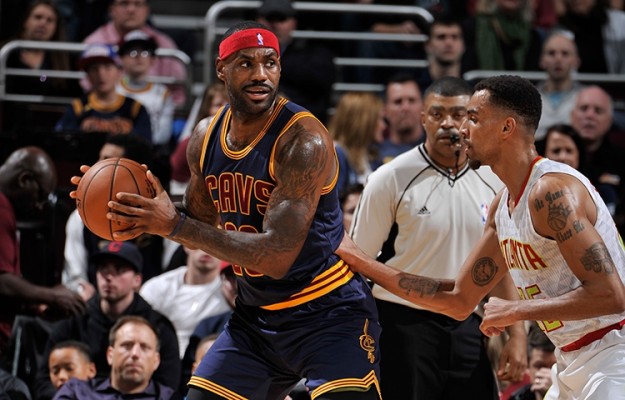 The injury-plagued Cavs were able to put together enough firepower to pick up the win, even without four key performers, including the two most recent additions to the injury list: guard Mo Williams and center Timofey Mozgov.

Love led all scorers with 25 points on 9-of-15 from the field, while hauling down 11 boards. With respect to James, he didn’t score until midway through the second quarter, but closed things out with a flourish as he tallied 10 points in the final quarter to finish with 19 points and 11 rebounds. Additionally, he came very close to a triple-double, closing out with eight assists.

Cavaliers head coach David Blatt spoke about the contrast between the start and finish for James:

“In the first half, he just recognized the situation and then turned it on in the fourth quarter,” said Blatt.

James himself saw that stretch as a positive:

“Tonight was one of those nights where the guys did a great job of carrying me,” James said. “We gave effort and stuck to our game plan.”

Meanwhile, Tristan Thompson, starting at center in place of the injured Mozgov, had 12 rebounds and four assists in just the first half. He ended the night narrowly missing his own double-double with 16 rebounds and nine assists.

Two team positives on the night were that the Cavaliers dominated the defensive boards with a 40-26 advantage, while their free-throw shooting saw them connect on 16-of-19 on the evening. They also handed out 27 assists.

Love talked about the team’s effort over the previous two contests:

Defense helped put a clamp on Atlanta throughout the game, with the Hawks shooting just 37 percent from the field on the night. This was first evident in the opening quarter, when they managed only five points in the final six minutes, allowing the Cavs to run off 11 unanswered points that turned a 17-16 deficit into 27-17 lead late in the quarter.

The Cavaliers’ lead during this stretch got as high as 15 and included some courtside drama. Hawks’ coach Mike Budenholzer was ejected from the contest with 6:27 remaining in the second quarter after bumping an official. Prior to halftime, the Cavs’ advantage inched up to 17, but when the horn sounded to end the second quarter, it was again 15 at 57-42.

The third quarter was virtually split in half for each team, with Cleveland using a 15-4 run in the first five minutes to take a commanding 72-46 lead. However, over the final seven minutes, Atlanta was able to chop that lead in half, with an 18-5 run, giving the Cavs a 77-64 lead.

Blatt acknowledged the inconsistencies in his postgame remarks:

Thompson spoke after the game about the need to avoid a third quarter letdown in the future:

“To be a great team, you have to play well all the time,” Thompson said.

J.R. Smith had another up-and-down night, connecting on four three-pointers on his first eight shots before then missing his next nine attempts from the field. On his final shot of the night, he converted a three-point play.

Despite that cold spell, Blatt was very happy with Smith’s defensive effort:

“He played a great defensive game, he was outstanding,” Blatt said.

Asked about the fact that the Cavs continue to win despite missing four key players, Blatt refused to assess their potential, saying that he wasn’t looking past their next contest:

“For us right now and the situation that we’re looking at, the bar I’m looking at is Monday,” said Blatt. “I don’t know who’s going to play on Monday.”

James again invoked the team’s mantra of “Next Man Up” when asked about the team’s depth:

“No matter who’s in the lineup, we have to share the ball, play defense, take good shots,” James said.

The victory improves Cleveland’s mark to 10-3 on the year and they remain perfect at home with a 7-0 record. Meanwhile, Atlanta falls to 9-6. The Cavaliers will remain home for one more game, hosting the Orlando Magic in a 7 p.m. ET contest on Monday night before then traveling to face the Toronto Raptors two nights later.