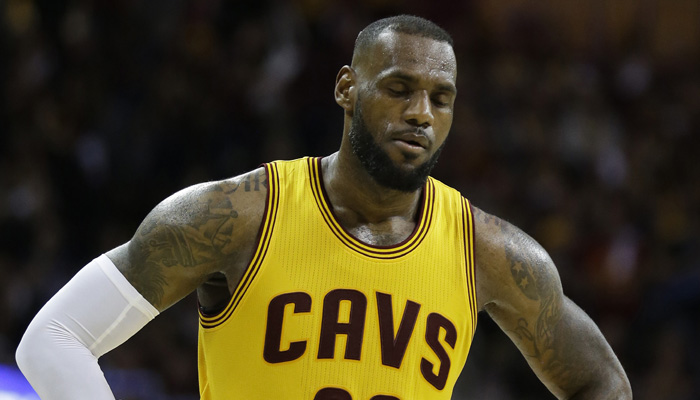 For years, the San Antonio Spurs have maintained a level of success by resting key players throughout the regular season. Veterans such as Tim Duncan, Manu Ginobili, and Tony Parker have often taken nights off or have played shorter minutes in order to assure the best possible chance for health during a lengthy playoff run.

After five straight trips to the NBA Finals, many have expected LeBron James to handle his regular season workload in the same manner. He carried an incredible burden through last season’s playoff run, and this was extremely evident in the finals when the the four-time MVP did everything he could to make up for the losses of teammates Kyrie Irving and Kevin Love.

However, circumstances surrounding the Cleveland Cavaliers have made it difficult to give the 11-time All Star bulks of time off. Irving is still on the mend from a fractured kneecap and this has forced James into taking on more of a scoring responsibility than initially planned. At the same time, Iman Shumpert’s surgically-repaired wrist is keeping him from being the Cavs’ top perimeter defender, while thrusting James into that role for long stretches.

Typically, conventional wisdom might say that intermittent rest would be best for James as the season progresses. And the Cavs showed last year that they are more than capable of winning on the road in the playoffs, so the fight for home court advantage is not an essential one.

However, another school of thought might be that with Irving out, James is needed to be the conductor of the offense. Mo Williams has done a commendable job filling in for Irving as he recuperates, but the offense has sputtered at times when he is the only creator on the floor. Oftentimes the Cavaliers become too reliant on dribble-drives and isolation plays, and struggle to get consistent quality looks when the starting lineup is not on the floor.

So, what should the Cavaliers do?

As Dave McMenamin writes, “Why not ride him while he is feeling good?”

James has actually seen slightly increased minutes per game compared to last season. The 13-year veteran has repeatedly said that if he is healthy enough to play, he will play. In fact, he stated that his goal is to play in all 82 regular season games for the first time in his career.

However, is this what is best for the Cavaliers?

It is important for people to realize that James is an athlete like no other in recent NBA history. While father time is undefeated, the positives of keeping him in games playing the role he has played throughout his career far outweighs the negatives.

First of all, playing James night in and night out will allow the Cavaliers to develop an identity. It doesn’t necessarily have to be the identity of “LeBron’s team,” but roles have to be filled. He is going to be there night in and night out in the playoffs. Having him do the same in the regular season will make it easier for the rest of the team to figure out what their role is in the system.

This has been most evident with the play of Love so far throughout the season. Love is averaging 17.4 points and 11.8 rebounds per game. Both numbers are an increase over last season, and it is very promising to see James make a more concerted effort to get Love involed in the offense. If James was playing less minutes, or even sitting games out, it would be much more difficult to build the chemistry between these two.

Secondly, the confidence being built with early season wins will carry over throughout the season. Many expected the Cavaliers to have some early season struggles with their entire starting backout injured, and much of their frontcourt nursing offseason surgeries. Every win with Irving and Shumpert out builds confidence within the roster. With slow starts over the past week, some of these wins simply would not have happened without the fourth quarter heroics of James.

As the leader of the Cavaliers, James knows that the team is not playing to their potential right now, and little of that has to do with wins and losses. Any team with James as the focal point will be a title contender that will have no problem clearing 50 regular season wins. What has been frustrating to him, and likely David Blatt, however, is that the Cavaliers have shown flashes of dominance only to be followed by long droughts of lazy defense, careless passing, and sloppy play in general.

On the bright side, the Cavaliers seem to aware of the situation they are putting their leader in. Tristan Thompson recently responded to the fact that James is demanding more from his teammates, and Dave McMenamin of ESPN recently reported that James’ teammates welcome the constructive criticism.

Tristan Thompson on LeBron being critical of the Cavs: "That's what we expect from our leader. If he's not going to get on us then who is?"

In spite of these bumps on the road, the Cavaliers are off to a strong start to the 2015-16 season. The team currently sits at 8-3, which places them atop the Eastern Conference standings. This quick start can be attested to many factors. The Cavaliers rank fourth in the league in assists-per-game. Also, they currently stand at sixth in the league in three-point field goals made per contest.

Finally, it is simply too hard for me as a fan to say, “Keep James on the sidelines for extended periods of time.” While guys like Steph Curry, Kevin Durant, and James Harden might score more points, no player in the world offers more potential to take your breath away at any given moment. It could be with a chase down block out of nowhere to erase a fast break. It could be with a ferocious dunk through traffic, elevating with the grace of Michael Jordan and the ferociousness of Shaquille O’Neal. It could be a quart of defense on the opposing team’s best player, or a series of dagger three pointers to squeeze the life out of a team.

It doesn’t matter. He can do it all.

Night in and night out, he usually does do it all, and I don’t want to miss any of it.

James knows his body as well as anyone. His pregame routine is filled with stretching and plyometric exercises to make sure he is ready. His postgame and off-day routines are filled with cutting edge recovery techniques that make sure he will be ready to go. As long as he feels like he can handle the workload, I say go for it. Fans only get to witness this type of greatness every so often, and need to enjoy it while it is still here.