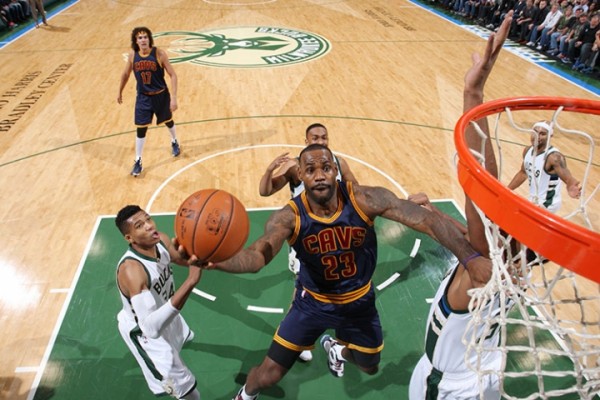 (Milwaukee, WI) – Despite a fourth quarter rally in the final six minutes of regulation that spawned two overtime sessions, the Cleveland Cavaliers watched their eight-game winning streak come to an end when they dropped a 108-105 decision to the Milwaukee Bucks on Saturday night at the Bradley Center.

The overtimes had been set up because the Cavaliers outscored the Bucks 17-6 in the final 6:33 of regulation, as LeBron James scored 11 of his 37 points on the night during the stretch. The last of those came on dunk with 16.9 seconds remaining.

James hit a three to open the second overtime, but Milwaukee quickly tied it up and led the rest of the way. Cleveland sliced their deficit to three on a trey by Smith with 27.9 seconds remaining, but was unable to get the ball back, falling to 8-2 on the year.

In something of an oddity, James scored just one first quarter point, yet finished with the 37 on the night. He added six in the first extra period and then contributed four in the final five minutes. He also added 12 rebounds to collect a double-double, while also dishing out five assists. One of the few areas where he struggled was at the foul line, where he hit only half of his 12 attempts.

“I feel like I can hit the switch at some point, but it hasn’t worked out the last couple of games with us being behind,” James said. “Maybe I need to flip the switch a little earlier.”

Joining James in the double-double department was teammate Kevin Love, who scored 24 and grabbed 14 boards. Richard Jefferson and J.R. Smith scored 14 and 10, respectively, with Jefferson hitting some key fourth quarter baskets. Leading the team in assists for the evening was Matthew Dellavedova with seven.

Love remained positive on the season’s outlook despite the defeat:

“We just need to keep a constant flow in our game,” Love said. “I know we’ll get on the right path again.”

Despite the grind of playing two overtimes, James felt fine after the game:

“I had a lot of energy coming into the game,” said James. “I felt like I could have played another overtime.”

The offensive boards helped the Bucks clinch the game in the closing seconds. That was ironic because after Milwaukee dominated that side of the glass in the first half with a 13-4 advantage, it was the Cavs that controlled it until the final seconds by a 10-1 margin.

Overall, the Cavaliers had a 54-51 rebound lead, but the team’s head coach David Blatt cited rebounding as one of the key factors in the loss:

“Ultimately, the reason we lost tonight was that we didn’t rebound well,” Blatt said. “In the end, that cost us.”

James focused on the team’s 20 turnovers on the night as the main factor:

“We gave ourselves a chance to win, but 20 turnovers is a recipe for disaster,” said James.

Love also focused on the turnovers as a problem on the night and gave a reason for the mistakes:

“It was mental. If we decide to take care of the ball, we will.” Love said. “We need to continue to get better.”

The hole the Cavs were forced to dig out of stemmed from poor play in the second and third quarters. Cleveland struggled from outside in the final eight minutes before halftime, making two field goals in just seven attempts, while also committing five turnovers. That allowed the Bucks to head into intermission with a 50-44 lead.

Going cold in the third was again costly for the Cavaliers as eight consecutive misses and three turnovers over a five-minute span changed a brief one-point lead into a nine-point deficit. A pair of threes by James were the only points over the last nine minutes, with the Cavs facing a nine-point deficit at 70-61 with one quarter left.

“Even though we’re playing well, we’re not that team yet.” James said. “We have to improve in every aspect of our game because we’re not a great team yet.”

The Cavaliers will close out their three-game road trip with a short trip to face the Detroit Pistons on Tuesday night in a game set to tip off just after 7:30 p.m. ET.