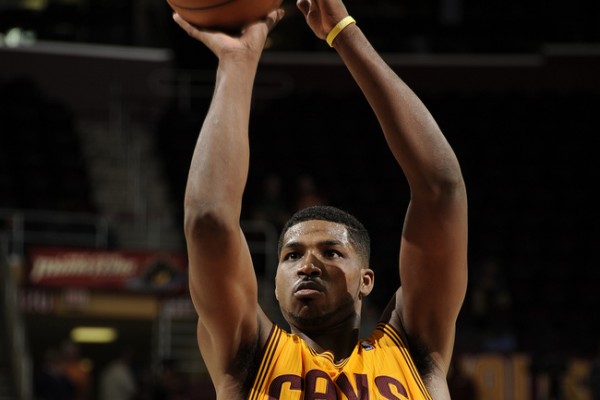 If you have paid any sort of attention to the Cleveland Cavaliers‘ first six games, chances are you have noticed that Tristan Thompson has added some kinks to his offensive game.

In years past, Thompson’s scoring was largely limited to alley-oops or easy shot attempts off of offensive rebounds. Fast forward to the beginning of the 2015-16 season, and Thompson can now be seen taking jump shots from as far as 17 feet out.

What is noteworthy is that he is taking these shots with confidence—he took a 17-footer in the win over the New York Knicks on Wednesday night with 17 seconds left on the shot clock.

Thompson had the following to say about his newfound confidence:

“I’m just feeling good. I’m not going out there searching for it. Like I said, it’s within the flow of the offense, time and score. Guys are, and LeBron [James] is, telling me if it’s within the offense and it’s a good play, shoot it. Same as Kevin Love. They see me working on it and practicing it, so if it’s open, I’m going to shoot it. If not, I’m going to make a play or attack the rim and do what I’m here to do, which is play hard and be an animal.”

On the season, Thompson is 3-for-7 on shots from 10-to-19 feet out. In the win over the Philadelphia 76ers on Friday night, the 24-year-old power forward converted on his only field goal attempt of the game on an 18-foot jump shot after dribbling two times.

Teammate Kevin Love says that Thompson has been working on this facet of his game:

“He’s been working on it. We’ve been down there shooting quite a bit. He’s a work horse. I don’t know if he’ll be 100 percent every single night, but we have a lot of confidence in him and everything that he does.”

After signing a five-year, $82 million deal prior to the start of this season, there was some criticism considering Thompson was just a career 10.1 points per game scorer coming into the season. The fifth-year forward stresses that it’s key for him to continue to grow as a player:

“You got to come back better every year, so for me, I definitely worked on my jump shot and footwork and moves in the post. So every year you got to bring something new to the table and the only way you’ll know if it’s going to work out for you is if you try it out in a game, right?”

If Thompson continues to add skills to his offensive game, the Cavaliers can only benefit as a result.