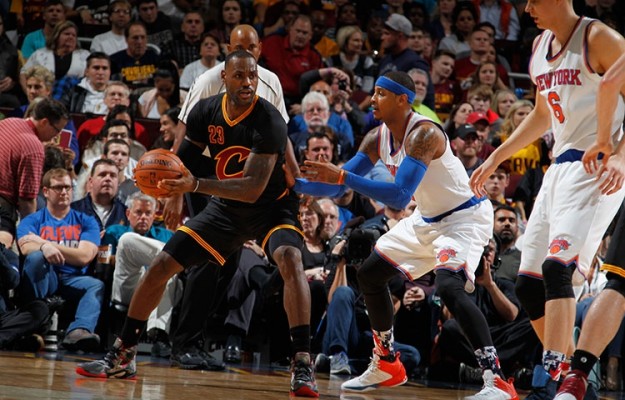 (Cleveland, OH) — What had been a struggle through three quarters Wednesday night for the Cleveland Cavaliers, and LeBron James in particular, was soon forgotten in the wake of a dominant fourth-quarter performance that turned back a determined effort by the New York Knicks.

James scored 11 of his 23 points over the final 12 minutes as the Cavs posted their fourth victory in a row by defeating the Knicks 96-86. His outburst included a three-point field goal which ended a streak of 13 unsuccessful attempts by him from that distance dating back to last week’s regular-season opener.

The Cavs fell behind 13-3 in the first four minutes and never led until a slam by Tristan Thompson off a lob from Matthew Dellavedova in the final minute of the third quarter. James went 6-of-15 from the floor with only three rebounds and two assists through three quarters but was raring to leave that subpar stat line behind.

In a game where neither team shot 40 percent from the floor, the Cavs won with defense as much as they did in getting 22 points from Mo Williams and 13 rebounds off the bench from Thompson. The Knicks made 13-of-21 shots in the first quarter to grab a 32-18 lead, matching the exact same score the Cavs fell behind by Monday night at Philadelphia. But they went only 20-of-63 over the final three quarters, with Carmelo Anthony finishing with a 6-of-18 performance.

Fittingly, the game turned in the Cavs’ favor for good when James intercepted a lazy pass by Jose Calderon and drove for an uncontested dunk which put them up 79-75. It was one of his game-high four steals.

“In order for us to win, even when you don’t shoot the ball well, you’ve got to defend,” he said. “And we did that from the middle of the second quarter all the way through.”

Playing without J.R. Smith, who suffered a right knee contusion against the 76ers, the Cavs came out flat. Even with Smith not in uniform, they settled for too many three-point attempts in the first quarter. As poorly as they shot from that distance, a bigger source of frustration might have been their problems at the free-throw line.

The Cavs couldn’t connect on six of their first eight free throws. That included a pair of misses by James, who responded by tearing the sleeves on the black alternate jersey he and the rest of the Cavs wore. James had grumbled about being forced to wear sleeved jerseys in a 2014 game while still with the Miami Heat, claiming the material was pulling up underneath his arm.

Richard Jefferson started in place of Smith and played the bulk of the first three quarters before coach David Blatt went primarily with James, Williams, Thompson, Dellavedova and Kevin Love down the stretch.

“There are games you just have to grind out and win with grit,” Blatt said.

Williams had 18 points through three quarters, and his three-pointer capped a decisive 12-2 run during a four-minute stretch after Blatt brought James back in with 9:22 remaining. For added emphasis, Williams found James cutting down the lane for a slam in the closing minutes.

Not only did the Cavs hold the Knicks to 39.3 percent shooting, but they held them scoreless on fast-break points. The Cavs finished with a 24-0 advantage in that category.

They also bounced back from a 38-point first half to go 6-of-12 from three-point range and 18-of-20 from the line over the final 24 minutes.

“We’re going to have some bumps,” James said. “Hopefully it’s more flat land than any bumpy road for us.”

The win marked the start of a four-game home stand which continues Friday night against the 76ers.