Don't Miss
Home / Editorials / Does Timofey Mozgov Have a Long-Term Future in Cleveland?

Does Timofey Mozgov Have a Long-Term Future in Cleveland? 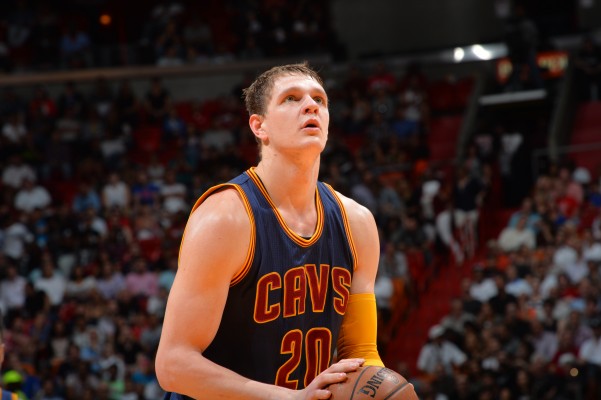 The Cleveland Cavaliers have entered the summer of 2015 looking to keep the band together for another championship run in 2016 by re-upping their own free agents and keeping the money largely in-house. Doing this has required throwing around an unprecedented amount of cash that will result in one of the largest payrolls in NBA history next season.

But what about the 2016-17 season? While the three core pieces of the Cavs roster are locked up for the foreseeable future, there remains one essential piece whose future is very much up in the air.

Timofey Mozgov will be entering free agency in 2016 when multiple teams are flush with cap room with the influx of money coming from the NBA’s new TV deal, and the list of marquee free agents is relatively thin.

After this initial wave of big names, Mozgov finds himself as the best remaining option at the center position. While this standing would normally net a quality big like Mozgov a contract floating around $11-12 million (see Nikola Pekovic), the NBA is no longer working within these same parameters. It has entered a period where a center like Omer Asik is going to make $11 million a year, just after playing his way onto the bench in the playoffs. Under these new circumstances no number is outside the realm of possibility for Mozgov.

Could the big man see a starting number of around $15 million a year? More than likely.

Now, would the Cavs be willing to pay such a large sum for a player who averaged 9.7 points, 7.3 rebounds, and 1.2 blocks last season? Debatable.

While these numbers don’t paint the complete picture of a player who almost singlehandedly mended the Cavs’ leaking defense last season, every dollar counts for the team going forward.

The Cavaliers’ cap number currently sits at just over $97 million, which is already $12 million above the $85 million luxury tax threshold for this upcoming year — and that’s not even including the pending contracts of J.R. Smith and Tristan Thompson.

Even with the incoming jump in salary cap in 2016-17, the Cavs are projected to be in the luxury tax for the foreseeable future. Every extra dollar the team spends over that threshold will cost them exponentially more the farther into the tax they go and the longer they stay there.

Luckily, the Cavs have not been over the luxury tax threshold long and thus are not yet subject to the repeater tax intended to punish teams for inhabiting the luxury tax territory for three of the previous four seasons.

So in theory, the Cavs could hang on to Mozgov, if they’re willing to pay.

But what if they’re not?

Unfortunately for the Cavs, there doesn’t seem to be a feasible alternative in replacing Mozgov without a mid-season trade happening.

The team salary puts the Cavs over the “apron” or $4 million over the tax threshold. This prohibits the team from receiving players in a sign and trade, cuts into the amount available for a mid-level exception, and prohibits them from taking advantage of their bi-annual exception.

So unless the team decides to bring over 30-year-old Russian center Sasha Kaun, who they own the rights to, don’t expect the Cavs to sign anyone else to replace the production of Mozgov.

If they decide to use pieces already present on the roster, the coaching staff may try to slot either Tristan Thomspon (expected to sign soon) or the often-injured Anderson Varejao at center. This is the plan of attack the Cavs used early last season, but both tried and failed in that spot before the arrival of Mozgov.

Thompson excels at defending the pick and roll but simply doesn’t have the imposing size or wingspan that Mozgov has that allows him to deter opponents from the rim.

Varejao is a whirling dervish of hair and energy but has never been mistaken as an imposing rim defender. Furthermore, Varejao is coming off yet another season-ending injury, and nobody knows what he will bring to the table next season.

But the Cavs still have their monster trade exception from the Brendan Haywood contract to play with, so if the team is not confident in their ability to retain the talents of Mozgov past this season, there may be some cheaper alternatives available by the trade deadline.

While many have been impressed with the Cavs’ willingness to spend this offseason, the trend will truly be tested going forward.