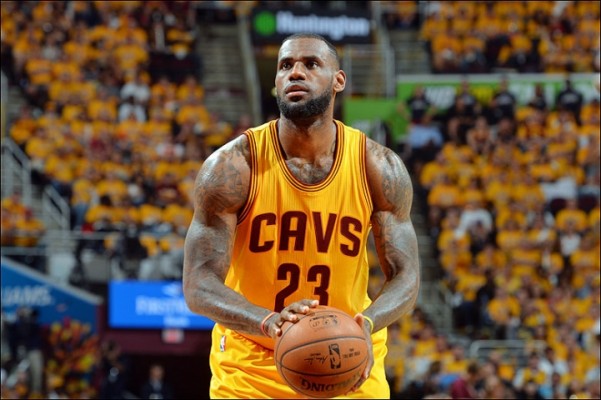 (Cleveland, OH) – The Cleveland Cavaliers (3-0) won Game 3 of the Eastern Conference finals against the Atlanta Hawks (0-3) in an overtime thriller.

The Cavs were without Kyrie Irving for the second game in a row as the young star continues his recovery from knee tendonitis, which has plagued him all series.

The Hawks were similarly undermanned as three-point marksman Kyle Korver sat out with an ankle injury he sustained in Game 2.

Atlanta came out of the gates looking like a team playing for their playoff lives, as they scored on five of their first eight shots, while Cleveland started off slow shooting 1-10 from the field to start the first quarter.

LeBron James on the other hand struggled to start the game, going just 0-9 in the first quarter with no points and a +/- of -8, his worst start to a playoff game in his career.

The Cavs were able to stay in the game though thanks to their offensive rebounds (9) and hot shooting from behind the arc (4-9) ending the first quarter with a Hawks 24-21 lead that should have been much bigger.

The early deficit did not shake David Blatt‘s confidence, who was happy with the Cavs’ execution up to that point.

“In the first quarter we couldn’t get the ball to go down,” Blatt said after the game. “A lot of shots on the rim. We didn’t turn it over a whole lot. We weren’t making a lot of mistakes, we just couldn’t make shots. We stayed with it and played the way we wanted to play.”

The Cavs’ offense rebounded in the second quarter behind the offense of James, J.R. Smith, and Matthew Dellavedova, who all shot a combined 7-15 from the floor, 2-5 from three.

LeBron’s first points of the game didn’t come until a few minutes into the second quarter on some free throws, but he seemed to regain his confidence and energy after seeing the ball go through the hoop, as he continued to attack down hill as the quarter progressed.

“I worked extremely hard, and for me as a leader, no matter how I’m feeling, I have to make some plays,” James told reporter Rachel Nichols after the game. “I started the game out of character, out of rhythm, but I had to make a difference.”

The Hawks responded to the onslaught with some improved shot-making from three-point range. The team shot 4-7 (57%) in the second quarter from three after shooting just 2-6 (33%) in the first.

The game took a turn at the end of the second quarter when Horford was assessed a flagrant two penalty and subsequently ejected after he dropped an elbow on Dellavedova during a loose ball scrum.

With Horford out, and the Atlanta paint wide open, James continued his attack at the rim, scoring 15 of his 37 points in the third quarter. The Cavs took control of the game, but the Hawks never let it get out of hand with strong play from Paul Millsap, Shelvin Mack, and Mike Scott, who scored a combined 20 points on 9-13 shooting.

With James sitting at the start of the fourth quarter, the Cavs didn’t get complacent, but immediately went on a 7-0 run sparked by the energy of Tristan Thompson to extend the lead to 10. Thompson has haunted the Hawks all series long, and tonight was no different.

“The Janitor” finished the game with 10 points, seven rebounds and two blocked shots in 42 minutes. While the numbers won’t tell the whole story, Thompson’s energy on the offensive glass forced the Hawks to almost completely abandon their transition offense, evidenced by their 10 points in transition.

The undermanned Hawks battled back in the fourth quarter with a gutsy effort on both sides of the ball, which resulted in a 20-7 run that gave the Hawks a four-point lead with under two minutes to go.

It looked as though Atlanta might’ve been able to steal a game on the road as the clock winded down, but a clutch block from Thompson along with a game tying free throw from Iman Shumpert sent the game to overtime.

In the overtime period, James, who recorded a total of 47 minutes, carried the Cavs with his effort on both ends, despite tweaking his ankle earlier in the game.

“I felt like I couldn’t give anymore, but then it was mind over matter,” LeBron said regarding his decision to stay in the game after injuring his ankle. “There was no way I could walk to the bench at that point understanding the circumstances we were in, and I was able to push through.”

When the clock struck 0.0 and the Cavs’ victory was sealed, James collapsed to the floor in exhaustion, a fitting image encapsulating his effort carrying the team throughout this series. His effort and will has not been overlooked by his coach so far in this series.

Game 4 will be played on Tuesday in Cleveland, as the Cavaliers look to make their first NBA Finals appearance since 2007.

When asked how the Cavs would approach Game 4, LeBron stressed the team’s consistent approach.

“Same as the first three games. We’re a desperate team, we’re a banged up team. If we come out and play as hard as we can, defend at a high level, and share the ball offensively, we give ourselves a chance to win.”

After gutting it out for 47 minutes, LeBron was asked after the game whether or not his status was in doubt for a pivotal Game 4.

“Not a chance,” said the small forward.