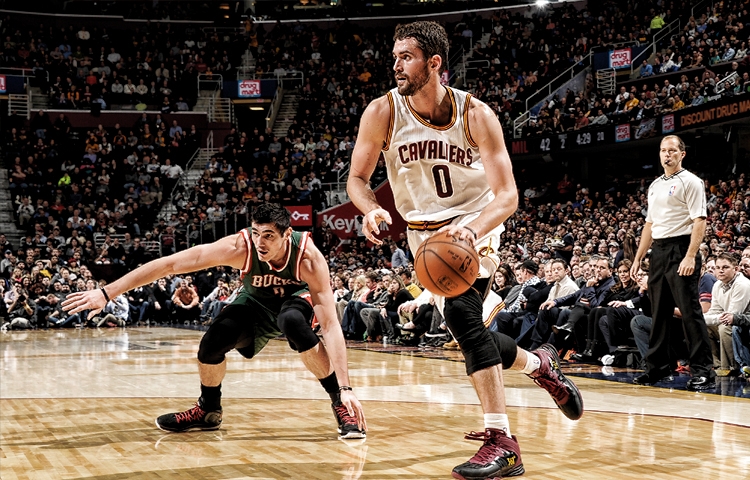 The win was Cleveland’s fourth straight and improves their season mark to 9-7.

The team’s big three of Kyrie Irving (28), Kevin Love (27) and LeBron James (26) combined for 81 points on the night, with James and Love ending up with double-doubles.

The Cavaliers trailed 89-86 with just over five minutes remaining in the game when Love nailed his fourth three-pointer of the night from the right corner with 4:44 to go.

Less than 20 seconds later, Milwaukee’s Giannis Antetokounmpo had his jumper blocked by veteran Mike Miller, with Irving then converting a three-point play. Following another miss by the Bucks, James scored on a driving layup to make it 94-89 in a span of just 56 seconds.

Milwaukee would twice get within three, but eight free throws from James in the final 33 seconds ended any comeback hopes by Jason Kidd’s squad, who dropped to 10-9 on the year.

Irving noted a difference in the team’s play down the stretch, saying, “That’s probably the best we’ve moved the ball in crunch time.”

One quarter earlier, the Cavaliers had taken a brief lead at 59-58 on an Irving jumper with 9:42 left, and would tie it at 61 a minute later on an Anderson Varejao layup.

Over the next two minutes plus, the Bucks put together a 13-2 run to make it 74-63, and had a chance to bump the lead up to 13 following a James turnover. However, a missed dunk by Larry Sanders led to the first of Miller’s pair of three-pointers that lit the spark under Cleveland, resulting in nine straight points.

The Cavs defense shut down Milwaukee for most of the final three minutes of the third, allowing the team to knot the score at 79 in the final 20 seconds after James split a pair of free throws.

Miller’s performance came after not only sitting out in the previous three clashes, but also sitting for the entire first half. Afterwards, he gave credit to the team’s ability to pass the ball saying, “When the ball moves, everyone can make plays.” Miller also added, “Once we get these guys in transition, we’re pretty good.”

When asked what sparked the team to its comeback, Cavs Head Coach David Blatt said, “We changed our defense up and we began to defend, which we didn’t do in the first half.”

Blatt made sure to acknowledge Miller in the postgame press conference by saying, “When he came in, he gave the other guys confidence. He sort of stabilized us.” Noting his absence from the lineup of late, Blatt said, “Mike’s been ready. We didn’t play him in the last three games because we were rolling. He stepped up in a big way.”

James, who played with Miller in Miami, also took note of the veteran’s rebounding effort on the night, “He showed tonight why he’ll be very valuable to us. People don’t know what a good rebounder he is.”

James also singled out Irving for praise when asked what has improved with regard to the point guard’s play since the start of the campaign. “Patience. He knows how to run the team. He has a lot of confidence in himself.”

Early on saw a slow start by both teams before the Cavaliers took brief control of the game at the five minute mark of the opening quarter. James split a pair of free throws to give Cleveland a 16-12 lead.

That would be the start of a 9-2 run, which gave the Cavs a 24-14 advantage with the team eventually closing the quarter leading by a 30-23 margin. The final basket came on Love’s third three-pointer of the stanza, giving him 17 in the opening 12 minutes.

Blatt said about Love’s performance, “He got his spots on the floor and played a really solid game for us,” which Love agreed with by adding, “My teammates are finding me.”

Another slow start by the Cavaliers to begin the second quarter saw them lose the lead following a 10-2 run by the Bucks that made it 33-32 with 9:07 to go before the break.

After the two teams were deadlocked at 40 following a Shawn Marion dunk with 4:59 remaining, Milwaukee would quickly take the lead back for the remainder of the half and virtually all of the third quarter.

One concerning stat with the final numbers could be seen in the fact that Miller’s pair of threes and a trio of baskets from Tristan Thompson served as the entire output from the Cavalier bench on the evening.

Blatt said, “We’re very much a work in progress. Today, we had to battle to beat a team that had won 10 games. I think that’s a really good sign.”

James concurred with the team’s direction, saying, “I like the direction we’re headed in now. It starts with me, Kevin and Kyrie and everyone else has to follow our lead.”

Irving noted that the game wasn’t in the mold of the team’s previous three contests, saying, “We won ugly, but at the end of the day, the only thing that matters is that we won.”

The Cavs will return to action on Thursday night in a nationally televised road clash from Madison Square Garden against the New York Knicks. The game will tipoff shortly after 8 p.m. E/T to accommodate the TNT broadcast.