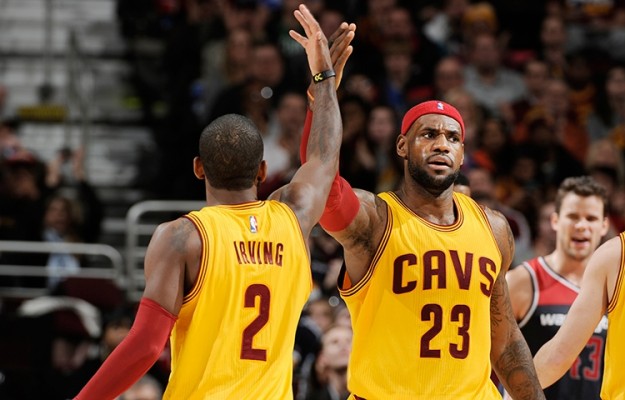 Both LeBron James and Kyrie Irving of the Cleveland Cavaliers received accolades from the NBA on Thursday when they each garnered a spot on the 2014-15 All-NBA squad. James won a spot on the First Team unit for the eighth straight time and ninth overall, while Irving earned a spot on the Third Team squad, the first time he’s achieved this honor.

James, along with Golden State guard Stephen Curry were unanimous selections on the First Team, receiving recognition on all 129 ballots cast. They were joined by Anthony Davis, Marc Gasol and James Harden. Irving was grouped on the Third Team with Tim Duncan, Blake Griffin, DeAndre Jordan and Klay Thompson.

James was recognized for his overall game, as one of just three NBA players to score 1,700 points, dish out 500 assists, grab 400 rebounds and collect 100 steals this year. The other two players on that select list were Harden and Russell Westbrook.

That ninth selection for James also places him in the rarefied air of a four-way tie with NBA Hall of Famers Larry Bird, Magic Johnson and Oscar Robertson. Each of them sits in third place all-time in the league for years chosen.

One indication of James’ value to the Cavaliers can be seen with the team’s record with and without him during the 2014-15 regular season: 50-19 with him, 3-10 without.

Irving made great strides this year during his fourth season, twice breaking the 50-point barrier in a game. In the latter effort on March 12 against the San Antonio Spurs, he torched his opponent for 57, hitting a game-tying shot at the end of regulation in a game the Cavs eventually won.