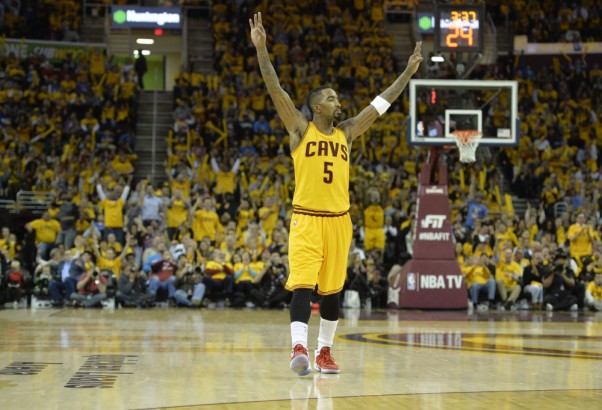 Throwing down the gauntlet as the Cleveland Cavaliers begin what they hope will be a long playoff run, guard J.R. Smith showed his confidence isn’t lacking when he was quoted in a first-person article, saying that no team can beat the Cavaliers.

Smith, who came to the Cavaliers on January 5 in the three-way deal that also brought Iman Shumpert from the New York Knicks, was blunt in his assessment, writing, “If we continue to play the way we have been playing, I don’t think anyone can beat us.”

In the article, Smith also made an effort to dispel a number of rumors about himself as well as some teammates. In the latter category, he discussed Kevin Love, who’s been reported by various media over the course of the regular season as being unhappy with the team.

According to Smith, “Kevin Love is the ultimate teammate…Mentally, Love is just in another stratosphere when it comes to understanding basketball.” Smith later added, “He does all the little things a team needs to win, and that sort of stuff trickles down to each of us, including me. Guys like him make you want to play harder.”

The reputation Smith brought with him to Cleveland was a player whose potential was stalled by off-the-court distractions to which he wrote, “Unfortunately, the way I am portrayed just isn’t reality. Now that I’m in Cleveland, though, it seems as though people are finally starting to get to know the real me.”

While he was with the Knicks, Smith played with Carmelo Anthony, who was drafted two spots below his current teammate, LeBron James, in the 2003 NBA Draft. He took the time to dismiss Anthony’s reputation as a selfish player, and then discussed his respect for James.

“He demands nothing less than the best of his teammates, and he doesn’t have to have an individual focus on scoring to maximize his impact,” wrote Smith about James, before adding, “He expects us to be accountable, and he doesn’t hesitate to make plays that ensure we do well before he does.”

Smith concluded his article by noting the camaraderie among teammates, writing, “People are going to discover that our greatest strength is that we play for one another. We willingly share our knowledge with one another so that collectively, the team becomes even stronger.”

Sunday’s 3 p.m. tipoff for Game One against the Boston Celtics will be followed by another contest on Tuesday evening.