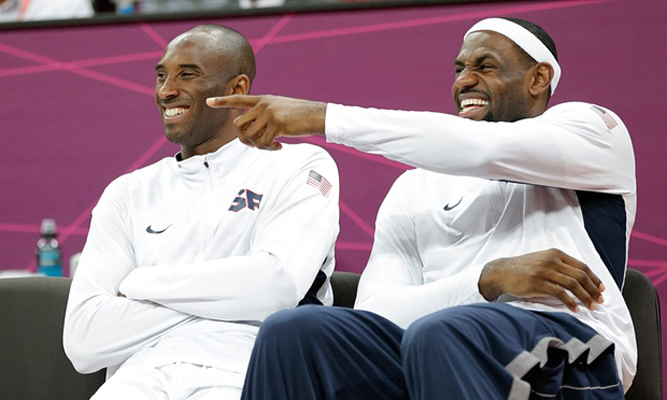 A Wednesday night matchup between the Eastern Conference-leading Cleveland Cavaliers and the also-ran Los Angeles Lakers might not ordinarily be a cause for reflection from LeBron James.

However, the pending retirement of Lakers future Hall-of-Famer Kobe Bryant and his last visit to Quicken Loans Arena had James looking back at how Bryant’s career had intersected with his at various points over the past two decades.

James noted that the first time that he and Bryant connected came in early 2002, when James was a prominent high school basketball star:

“I think my most fond moment is he gave me his shoes when I was in high school,” James said. “I think I was playing in a tournament in Teaneck, New Jersey, and they were playing in the All-Star game in Philly. And I had an opportunity to go meet him, and he gave me a pair of his shoes, and I actually wore them in a game against Oak Hill, against Melo [Carmelo Anthony], actually. So, six degrees of separation right there.”

With Bryant’s career in its final months, James spoke about the veteran’s impact on him:

“Anytime I even watch his games, even when I’m not playing him, it’s always, like, very emotional just knowing it’s his last hurrah,” James said. “And he’s done so much, not only for the Lakers organization, but for me as a kid growing up watching Kobe and things of that nature and also competing against him.”

Bryant has thrived in the Lakers lineup recently, averaging 26.4 points per game over his last five and scoring a season-high 38 points against the Minnesota Timberwolves on February 2. James is aware that despite Bryant’s decline over the past few years due to injury, he still is worth watching and capable of striking fear in the hearts of his opponents:

“I definitely watch when he’s on and I’m not playing,” James said. “He’s been in a great rhythm. I hope he gets back to a not-so-good rhythm by Wednesday.

The Cavaliers plan to honor Bryant with a pre-game video chronicling his legendary career, following in the footsteps of other teams. James is looking forward to the entire night:

“It’s going to be really cool to see him on Wednesday for sure,” James said. “Hopefully — I know our fans — they’re going to give him a great reception, well-deserved.”

After Wednesday night’s game, James and Bryant won’t have to wait long to face each other again, with the All-Star Game in Toronto set for this coming Sunday night. The last regular season matchup against Bryant’s Lakers will occur at the Staples Center on Thursday, March 10.