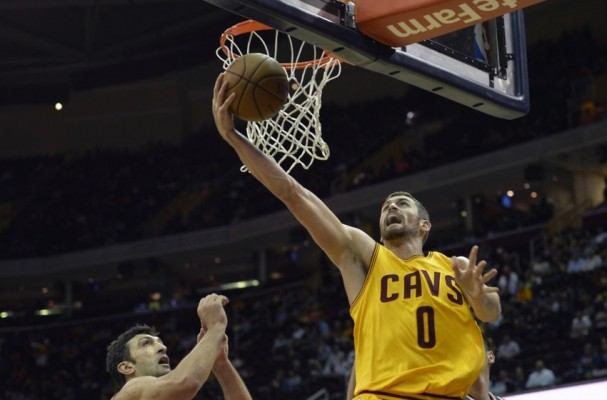 Less than 24 hours after the Cleveland Cavaliers inflicted a 31-point beating on the Boston Celtics, Steve Kyler of Basketball Insiders indicates that the Celtics are targeting Cavs forward Kevin Love in the free agent market this summer.

Boston has gotten rid of a good deal of payroll off their roster over the past year in a rebuilding plan engineered by their general manager, Danny Ainge. It’s estimated that they may have from $22-$25 million to spend in the offseason, an amount which would be enough to bring in one player on a max contract situation.

Signing with the Celtics would make Love the highest-paid star of the team, a status he had with his previous team, the Minnesota Timberwolves. However, having tired of never reaching the playoffs with them, Love indicated to the Timberwolves that he wanted out prior to last summer. That led to a trade with the Cavs.

Love can opt out of his contract at the end of this season, but has repeatedly said that he plans on signing a long-term extension with the Cavaliers. Given the likelihood of a large increase in each team’s salary cap in the next few years, Love will be able to receive a max deal with Cleveland, though that increase won’t take effect for two more years.

Having struggled with his game during parts of this season, outside speculation has festered for months that Love wasn’t happy with his role on the team and might consider leaving.

However, the fact that the Cavaliers have arguably been the NBA’s hottest team over much of the past two months, and could challenge for the NBA title for years to come, would seemingly make the idea of Love leaving a remote option.

The rumors, however, will likely continue, since last November, prior to the Cavaliers’ game in Boston, Love reflected on a trip he made last summer to that city. At the time, that heightened speculation that the Celtics would be looking to acquire him from the Timberwolves.

“I love this city (Boston),” said Love at the time. “I always planned on coming back here, checking out Red Sox games. Growing up being a big Boston Celtics fan, it’s fun to play here.”