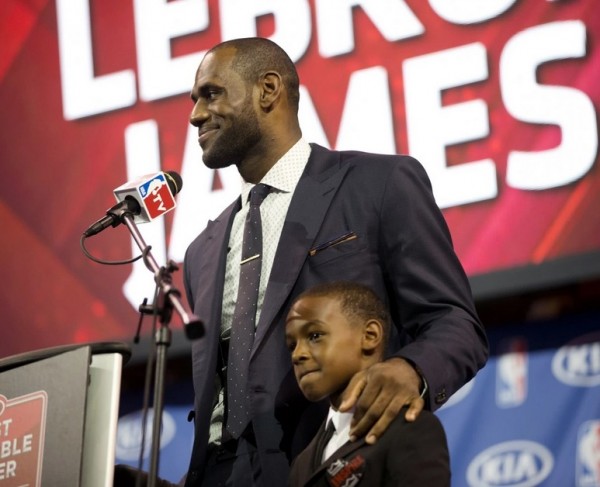 The talent of the Cleveland Cavaliers’ LeBron James is such that his 10-year-old son LeBron Jr. has received letters of interest from college basketball, a fact that doesn’t make LeBron Sr. too happy, according to the Cleveland Plain Dealer.

Speaking after the team’s shootaround on Tuesday morning, James said, “Yeah, he’s already got some offers from colleges. It’s pretty crazy. It should be a violation. You shouldn’t be recruiting 10-year-old kids.”

James also dismissed the idea of a recruiting website ranking sixth graders, saying, “It means absolutely nothing. You’re going to get ranked as a sixth grader and then you have to go into the seventh grade. I mean it’s not like you could be drafted or something out of the sixth grade or anything like that.”

Technically, NCAA coaching staffs are allowed to watch players in sixth grade or earlier, with the only stipulation being that it has to be done during the standard recruiting periods. However, recruiting can begin once a player begins ninth grade.

James’ son is currently a fourth grader who plays for an AAU squad. That segment of the basketball recruiting process has long been known as an avenue toward letting talented players know of a school’s interest.

During the college basketball preseason, Ohio State head coach Thad Motta said that James’ son was “on his radar,” a comment that was likely considered a joke. However, a source close to the school’s program said that Ohio State had sent LeBron Jr. a questionnaire.

As annoyed as he is with the current situation, James had high praise for his son’s talents, saying, “He plays just like I did. He has great awareness, and he’d rather pass first and set guys up. Most kids nowadays just want to score.”

Under current NBA rules, James’ son would have to play one season at the college level before becoming eligible for the NBA Draft.