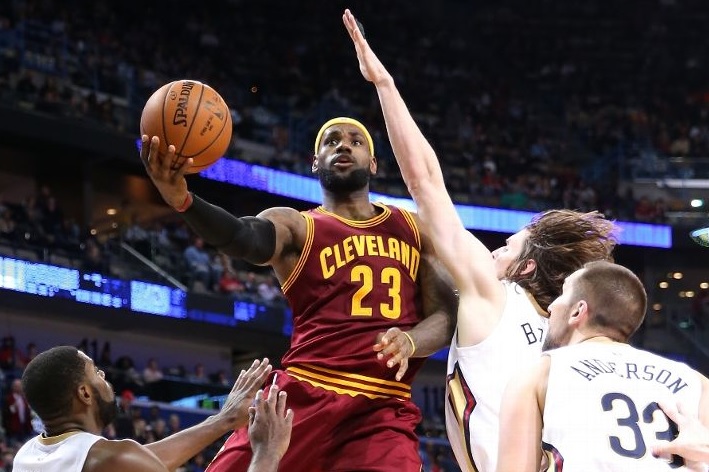 (New Orleans, LA) – Despite 41 points from the returning LeBron James, the Cleveland Cavaliers dropped their second game in two nights as they fell to the New Orleans Pelicans, 119-114, in road action at the Smoothie King Center on Friday night.

James missed Thursday night’s loss at Oklahoma City due to a sore knee, but showed no ill effects against the Pelicans. The veteran poured in 25 first half points, 11 more in the third quarter and five more in the fourth.

Afterwards, James said he had no problems with the knee, “I try not to think about it when I’m out there.” Acknowledging he was in his 12th NBA season, James also said, “I’m not 18 years old, but I can still do the things I did before.”

The Pelicans would lead by as many as 19 on two occasions in the final quarter before the Cavaliers made one final push that got them to within seven at 106-99 with 3:45 to go. Three unanswered baskets by New Orleans quickly stopped the rally.

Yet another push got them to within five at 112-107 after James Jones hit a three with 54.8 seconds left. The comeback was finally snuffed out when the Pelicans’ Luke Babbitt connected on a three with 39.1 seconds left.

Kyrie Irving was held scoreless until he hit a jumper with 8:22 left in the game and quickly heated up to finish with 17 for the game. The fourth-year guard also showed no evidence of any lingering problem from his minor knee injury from Thursday night that put a scare into Cleveland fans.

“For me, I got all the shots I wanted,” said Irving, who added, “As many mistakes as we made, we still had a chance to win the game.”

The Cavaliers were done in primarily by the scoring punch of Ryan Anderson and Tyreke Evans, who combined for 61 points on the evening. As he did in their earlier meeting, Anderson killed Cleveland from long range, hitting eight of his 11 attempts.

The Pelicans’ Anthony Davis left the game during the first quarter after taking an elbow to the chest and didn’t return.

Cavaliers head coach David Blatt was blunt in assessing his team’s defense, saying, “We didn’t do an acceptable job of defending at any point. We were late to the man, late to the ball.”

James also noted the defensive problems, saying, “Defensively, it was just one of those games where we couldn’t get sustainable stops.”

In the third quarter, James and Anderson Varejao were the only Cavaliers to score when New Orleans took control of the game. The Pelicans began to open the game up, leading by nine in the first two minutes before the Cavs cut it down to five at 72-67 with 7:40 remaining.

That only sparked the Pelicans to score eight unanswered points for an 80-67 lead. However, James kept Cleveland within breathing distance by notching nine of the next 13 points to make it 85-76 with 1:14 left in the quarter.

Two layups from Evans, the last coming with 1.9 seconds remaining, blunted that comeback and gave New Orleans another 13-point lead heading into the final quarter.

In the fast-paced first half, each team traded baskets for much of the time. One indication of how close the contest was can be seen in the 16 tie scores and 23 lead changes.

In the first quarter, New Orleans had their biggest advantage at four, when Evans hit a three at the 9:14 mark, but the Cavs ran off eight of the next 10 points to take a brief lead.

With both teams easily finding the basket in the opening quarter, the final minute of action served as a microcosm of the whole stanza. Cleveland held a small advantage twice before the Pelicans knotted the score at 33 to close out the scoring.

Quarter number two was more of the same, with the only surge coming in the final minute. That’s when Evans nailed a three and Austin Rivers’ dunk gave New Orleans a 64-59 halftime lead.

Much like their first meeting back on November 10, the Pelicans’ first half shooting was on target, connecting on just over 57 percent of their attempts from the field.

The bulk of the Cavaliers’ first half offense came via two of the Big Three, James and Kevin Love, who combined for 44 of the team’s 59 points during the first two quarters. James tallied in 25 on 10 of 14 from the field, while Love tossed in 19, 10 of those coming from the free throw line.

Love concurred with Blatt about the team’s defense, saying, “Our defensive schemes and rotations just weren’t there.”

New Orleans was whistled for three technical fouls during the first half, the first coming midway through the opening quarter for an illegal defense. The latter two came at the start of the second, when Pelicans’ coach Monty Williams and Evans were each hit with one.

In the final question of his postgame press conference, Blatt was asked if he tries to take a positive tone to losses. “As a basketball coach, I don’t have that luxury. Games like this contribute to an early demise.”

Cavs’ guard Dion Waiters was taken to a local hospital after leaving the game with what the team called abdominal pains.

The loss drops Cleveland to 13-9 on the year, while New Orleans evens their mark on the year at 11-11.

The Cavaliers return to action on Monday night when they host the Charlotte Hornets in a 7 pm ET tipoff. The game will be the first of five straight home matchups, with the next road clash set to take place on Christmas Day in the eagerly awaited return of James for his first game back in Miami.