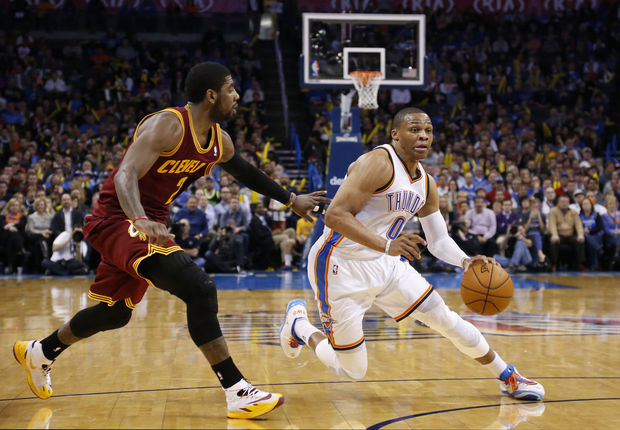 (Oklahoma City, OK) — The Cleveland Cavaliers (13-7) travel to face the Oklahoma City Thunder (8-13) on Thursday night at Chesapeake Energy Arena as they are coming off their eighth win in a row on Tuesday night against the Toronto Raptors.

The Cavs’ recent success has been in large part due to the improved defensive performance from the team, as well as a resurgent bench unit. Coach David Blatt is starting to zero in on each player’s role on the team and the improvements across the board are evident.

“It’s fun to be playing the way we’re playing right now,” said a smiling Kyrie Irving after the win, “It’s fun to be a part of. Guys are going to have different nights, and guys need to step up every single night. We need it from everyone, whether it’s two minutes, two points, one rebound, or anything. We need everything we can to win ball games.”

LeBron James is trying to stay grounded though, despite the win streak.

“I feel like right now we’re playing some good ball,” James said after the team’s game Tuesday, “I don’t really get too high or too low, I kind of stay even-keeled with such a long season. As fast as you can win five or six in a row, you can lose five or six in a row. It’s a process of getting better everyday and taking on the next challenge.”

It’s important for the Cavs to stay grounded, especially since they face off against the pesky New Orleans Pelicans on Friday, immediately following the game against the Thunder.

The largest standout over the past two games has been Cavs guard Dion Waiters. Waiters had his first back-to-back double-digit scoring output of the season (Brooklyn and Toronto), the two games featuring the return of injured back-up point guard Matthew Dellavedova. Whether it’s the return of the second unit’s floor general, or the recent trade rumors, Dion has really stepped up his play recently and has provided a much-needed boost for the team. The Cavs cannot afford to worry about a lead evaporating, or games getting out of hand when the Big Three is off the floor. Dion’s emergence in the second unit has proven to be invaluable as the season progresses and the fatigue of the 82-game season grows stronger.

Against Toronto, Tristan Thompson also had a strong game on the defensive end, though the extent of his impact might not have shown up in the box sheet. Thompson recorded a solid eight points and eight rebounds against the Raptors, but his overall performance was encapsulated by a late fourth quarter possession where Tristan switched onto Raptors point guard Kyle Lowry. Tristan stayed with Lowry ’till the end of the shot clock, and forced him into a terrible shot that never got close. It was a great play that highlighted how far Tristan has progressed thus far on the defensive end.

When the Cavs are able to get solid contributions from their bench, they are very difficult to beat and are never fully out of a ball game, as the Raptors learned Tuesday. The Cavs’ bench recorded 32 points, 12 rebounds, and eight assists on Tuesday. While those aren’t eye-popping numbers, it’s a significant improvement just to see some consistency in performance from this group.

As for the Thunder, the team is trying to make up lost ground from their early season injuries. They have all of their starters back in the lineup, and are only three games away from the eighth seed. Although Oklahoma City has won three in a row, their competition has been a bit suspect (Philadelphia 76ers, Detroit Pistons, Milwaukee Bucks). The Cavaliers will be the first team over .500 that the Thunder will have faced since their loss to the Golden State Warriors back on November 23rd.

The Thunder are an extremely dangerous offensive team, but they’re currently in the process of working through the rust formed after the lengthy absences of their stars Russell Westbrook and Kevin Durant. The Cavs should have the opportunity to get a decent lead early, and can’t afford to look lethargic to start the game. The Thunder have the horses to pull a win out of a close game late, and the Cavaliers cannot depend on the Thunder to fall apart as the Raptors did Tuesday.

On defense, the Cavs cannot hope to stop Westbrook and Durant, but if they can make them work for every basket, and slow or stop the Thunder from building momentum around those two focal points, then I believe the Cavs can pull a win out on the road in what will undoubtedly be a raucous environment.