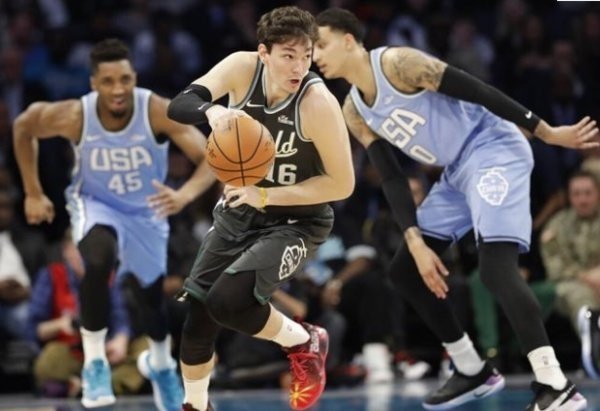 Cleveland Cavaliers forward Cedi Osman is currently in his second year in the NBA, but also possesses years of international experience.

One contemporary who has a similar pedigree is Dallas Mavericks rookie Luka Doncic, who indicated that Osman, in his words, has the opportunity to be “really great” by the time his basketball career ends.

Doncic and Osman were in Charlotte over the weekend to compete in the Rising Stars Challenge. The rookie spoke about how the combination of Osman’s inherent talent and strong work ethic offer him the opportunity to reach his full potential:

Two other international players who are also currently competing in the NBA have a similar opinion about Osman. One, Lauri Markkanen of the Chicago Bulls indicated that Osman’s star-worthy play in the EuroLeague was a big step toward future success in the NBA:

The second player is Bogdan Bogdanovic of the Sacramento Kings, who offered this platitude:

“Great guy. He’s dedicated his life to playing professional basketball. He works hard every single day. He is one of the best players that Turkey has in history … and they will cheer about him, follow him in his amazing career.”

Osman himself is confident that he can reach the lofty heights others have pegged for him:

“Yes, yes I am. From the last year until now, I think that I’ve put a lot of work in and I think I improved a lot during this stretch, and I was just, I already know that I can do this — that I can be a rising star, I can be an All-Star.

“It just, I have a learning process and you have to believe in yourself and be comfortable.”

One of the reasons that Osman continues to strive toward stardom is because of his desire to please his fans in Turkey, where he played for four seasons and also represented the national team:

“It is really important for me. It is because, you know I am going to be here, representing Turkey. They’re expecting a lot of things from me. They want me to be good and I know they are supporting me no matter what.”

This season has been miserable for the Cavaliers on the court, though Osman’s appearance in the Rising Stars Challenge saw him score two points and dish out four assists. For the Cavs, he’s seen action in 52 games and has averaged 12.6 points, 4.6 rebounds and 2.3 assists per game, having started all but one of those contests.