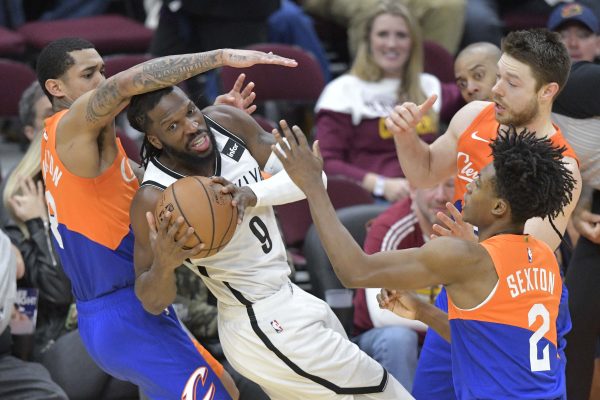 The Cleveland Cavaliers haven’t had much go their way this season, and that frustration continued in their final game before the All-Star break on Wednesday night.

After a triple-overtime loss to the Brooklyn Nets, a number of Cavs players were upset about the disparity when it came to fouls called between the two teams.

#Cavs players were furious about the officiating tonight. A few of them pointed out that they had four players foul out and only one player for Brooklyn had 5 fouls. “That was about the other team in the black and white uniforms tonight,” a player said.

For the game, a total of 37 fouls were called on Cavs players, with starters Ante Zizic and David Nwaba, along with reserves Larry Nance Jr. and Marquese Chriss, fouling out of the tight clash.

In comparison, the Nets were whistled just 23 times during the 63 minutes of action, with Nets starter D’Angelo Russell being the lone player to collect five fouls on the team.

At the foul line, the Nets made 77 percent (26-34) of their attempts, while the Cavaliers connected on 72 percent (13-of-18) of their tries. The 13-point difference on the charity stripe ultimately kept the Cavs from their second straight victory and some momentum entering the break.

The Cavs did have three shots to break a tie game in the final minute of regulation, but failed to end the game before heading into the first of three overtime periods.

In the first extra session, neither team was able to score in the first two minutes and it took a Collin Sexton layup with 2.8 seconds left to send it into a second overtime.

Those five minutes came down to a buzzer-beating 3-pointer from the Nets’ DeMarre Carroll to send the game into a third overtime. There, Russell’s nine unanswered points helped Brooklyn pull away for the victory.

The 12-46 Cavaliers will now attempt to regroup for the final 24 games of the season.

When play resumes, their first game will be next on Thursday, Feb. 21, when they host the Phoenix Suns.