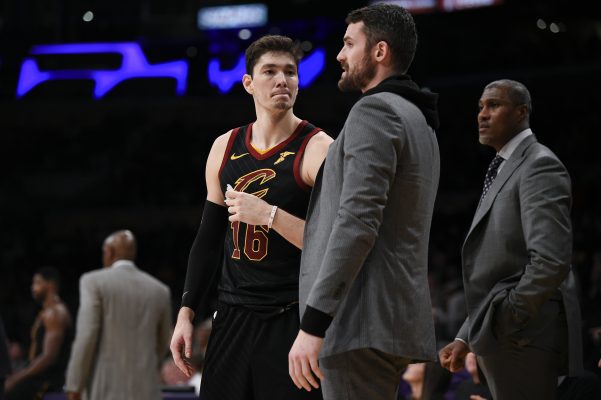 After Sunday afternoon’s 104-101 win over the Chicago Bulls, Cleveland Cavaliers head coach Larry Drew was asked about the impact Kevin Love has had since rejoining the team on the road.

“Well, it helps a lot. It helps a lot,” stated Drew. “As you know, Kevin has not been with us all season long and now that he’s able to be around the team, I’m sure our guys are excited having him around us. I see him in the ear of a lot of our young players talking to them. Just his presence alone, I’m sure it makes the guys feel good. And me, as the coach, I’m happy to have him around. I’m happy that he’s with us, accompanying us on all of our road trips. Hopefully, he’ll keep doing that until we get him back.”

For a young team like the Cavs, there’s no substitute for a strong, veteran presence in the locker room. Love exudes a level of maturity and professionalism that Cleveland’s new blood needs to see daily. Yet, due to the severity of his injury, the team hasn’t been able to see it while on the road until now.

Fortunately for Cleveland, it seems as though Love is poised for a return sooner rather than later. On Jan. 24, he participated in a full, non-contact practice for the first time since going down with his toe injury.

However, despite the progress, the Cavs will most likely be without Love in their next game on Tuesday night against the Washington Wizards.