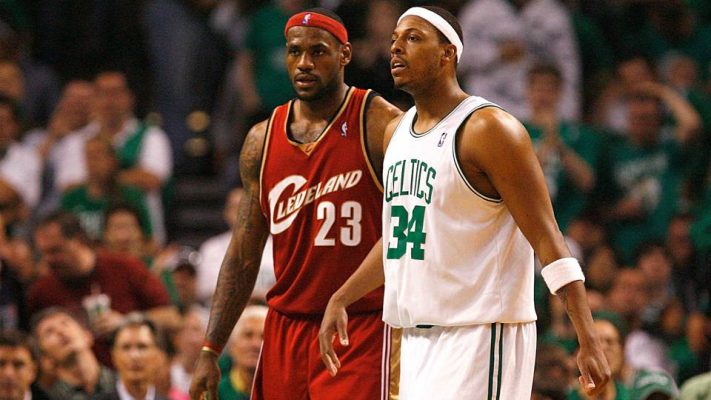 On one occasion during the 2004 preseason, that competitiveness nearly sparked a fight between the two players after a game.

The near fight between Paul Pierce and LeBron James in the hallway at Ohio State in a preseason game in 2004 is a great unknown what if.

James was set to start his second season in the NBA, while Pierce was poised to begin his seventh in the league when the Oct. 25, 2004 incident took place at Ohio State University. The spark came late in the third quarter, with Windhorst previously recounting the story in a 2012 article:

“Pierce scored twice in a row on James during the third quarter. On the second hoop, he used a crossover dribble to shake James on the way to the basket and let everyone know he’d just beaten the young kid.”

James then scored and subsequently stripped Pierce of the ball. After driving down the court to deliver a thundering dunk, the two players began jawing with each other and were assessed technical fouls.

That led to Pierce yelling at other Cavaliers players before then spitting toward the Cavs’ bench. That last action ended up with the NBA fining Pierce $15,000. Pierce ended up being carried away by teammates after continued arguing with James after the game, a consequence of the teams’ locker rooms being right next to each other.

The heated confrontation has long since been forgotten by most people because the basketball skills of both players overshadowed a fleeting moment. Both players will eventually be enshrined in the Naismith Memorial Basketball Hall of Fame in Springfield, Mass., with Pierce having retired after the 2016-17 season and James still going strong in his 16th NBA campaign.

The reason for recounting a near scuffle that took place more than 14 years ago was the ejection of Celtics forward Marcus Morris on Saturday night. Morris twice had to be restrained from attempting to fight a member of the Atlanta Hawks.