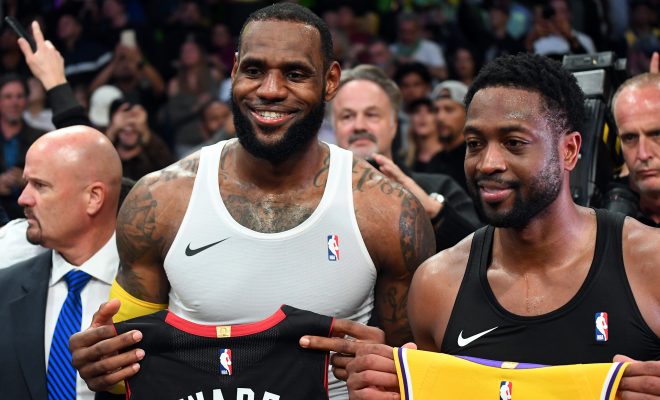 In postgame comments with close friend Dwyane Wade on Monday night, former Cleveland Cavaliers forward LeBron James seemed to indicate that his free-agency decision last summer boiled down to a choice between the Los Angeles Lakers and New York Knicks.

In reality, one report suggests that the Knicks were never in the picture, with the Cavaliers and Philadelphia 76ers being the other options.

Dwyane Wade: “I appreciate you letting it end here.”

LeBron: “It was either here or the Garden.” ? (via @WorldWideWob)pic.twitter.com/Uno5cgPSE3

James offered the remark to Wade following the Lakers’ 108-105 win over the Miami Heat on Monday night. The meeting between the two future Hall of Famers marked the 31st and final time that they would meet on the court.

Joe Vardon of The Athletic indicated that what James meant was connected to the venue and city where that last meeting would take place and not related to the teams that play there:

“According to multiple sources close to James, he meant that a final meeting with Wade was so special, it could only be held at a venue like Staples Center or Madison Square Garden — two history-rich arenas in the the glitziest and most glamorous cities in the NBA.

“James left the Cavaliers as a free agent in July. While James adores playing at Madison Square Garden, has enjoyed some of his best games there, and may have given the franchise a harder look if it had been in better shape organizationally, he actually considered the Lakers (likely his first choice all along), Cavs (who he’d taken to four straight Finals) and the Sixers.”

James ultimately chose to leave the Cavaliers for the Lakers in July, with Wade announcing two months later that this season would be his 16th and final NBA season. The two players entered the league together in 2003 and forged a close bond that saw them become teammates with the Heat from 2010 to 2014 and with the Cavaliers last season. Last February, Wade was traded back to the Heat.

cleveland cavaliersdwyane wadefeaturedlebron jamesNew York Knicksnews tickerPhiladelphia 76ers
← Previous Story Report: Kyrie Irving and Matthew Dellavedova Used to F— Each Other Up in Practices
Next Story → Cavs Rumors: Rodney Hood and Alec Burks Could Be on the Move