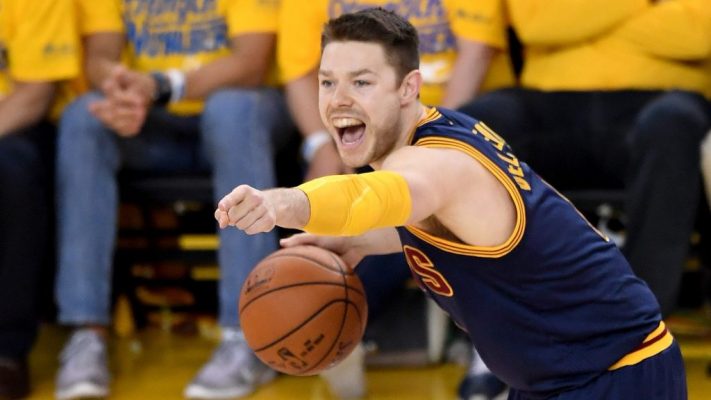 The Friday trade that sent Cleveland Cavaliers point guard George Hill to the Milwaukee Bucks had a silver lining for the veteran’s now former teammates Tristan Thompson and Channing Frye. That’s because one of the players the Cavaliers acquired in the deal is their former teammate Matthew Dellavedova.

As a member of the Cavaliers for three seasons from 2013 to 2016, Dellavedova developed a strong bond with his teammates because of his hustle and team-first approach to the game. After Friday night’s 129-110 loss to the Sacramento Kings, Thompson recalled Dellavedova’s stirring performance in Game 3 of the 2015 NBA Finals when the guard ended up in the hospital after guarding Golden State’s Stephen Curry:

“He left it all out on the line and he had to get an IV after the game. That was a crazy, Delly heroic moment.”

Thompson noted that bond with Dellavedova and indicated the value he’ll bring to this year’s edition of the Cavaliers:

“I’m glad my Aussie brother is back. He brings us veteran leadership, a guy that has won before, a guy who is going to push Collin (Sexton) and control the game for the second unit. He will make shots and he’s good at throwing lobs to me.”

“Delly is great. Glad to have him back. … He’s a champion, consummate professional, good for our locker room and glad he’s going to bring the good coffee beans to the facility.”

The coffee bean reference is related to Dellavedova’s quirky pregame ritual of drinking coffee, a standard that sometimes also took place at halftime.

The 28-year-old Dellavedova closed out his first tenure with the Cavs as a member of the 2016 NBA championship squad before then signing a four-year, $38 million deal with the Bucks the following month. However, he’s been struggling this season, primarily because of an ankle injury. In his 12 games thus far, he’s only averaging 1.7 points and 2.4 assists.

Dellavedova could play in the Cavaliers’ Saturday night home game against the Washington Wizards, and will quickly renew acquaintances with his former teammates on the Bucks. That’s because the Cavs are scheduled to play in Milwaukee on Monday night.