Video: Kyle Korver Talks About Major Difference Between Playing for Jazz and Cavs 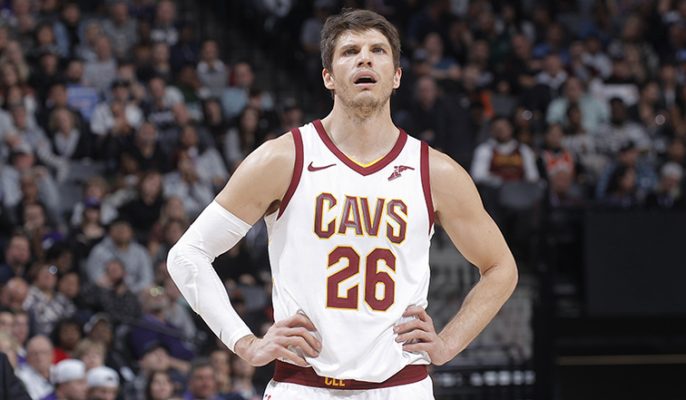 Former Cleveland Cavaliers veteran Kyle Korver has been a member of the Utah Jazz for less than a week, but he’s already more enthusiastic about the style of play on his new team.

He made that clear during a talk with media following a Jazz practice.

Korver’s brief time with Utah has already energized the 37-year-old:

“I was excited to come back. … I’m just really impressed with what I’ve seen here.”

Korver indicated that Jazz head coach Quin Snyder and the team’s general manager, Dennis Lindsey, were both on the same page as far as the direction of the team. That circumstance was not in evidence with the Cavaliers earlier this season. That resulted in Cavs general manager Koby Altman dismissing Tyronn Lue after just six games.

“Quin and Dennis, they have a real vision of what they want the Jazz to be, and how they want them to operate,” Korver said.

Of course, the different starts of the two teams might also be a clear indicator concerning why Korver is now happier in Utah. While the Jazz are still in strong contention for a potential playoff spot with an 12-13 record, the Cavaliers are continuing to struggle as part of a slow start that has seen them lose 18 of their first 23 contests. That woeful beginning could end up resulting in a series of more trades by the Cavs in the next few months.

Korver had previously made known to Cavaliers management that he wanted to be traded away following the departure of LeBron James in July. Due to the fact that the request wasn’t part of his current contract, the Cavs originally balked. However, they ultimately dealt Korver to a team that he felt comfortable with, having previously played for the Jazz. Playing in Salt Lake City also had particular significance for Korver, since there was where he met his future wife, Juliet.

While the Cavaliers acquired a pair of future second-round picks, part of the deal also included veteran guard Alec Burks, who has already been the subject of some trade talk. Burks is in the final year of his contract and could be sent elsewhere before the February trade deadline.

Korver and the Jazz will next be in action on Tuesday night, when they host the San Antonio Spurs. Meanwhile, the Cavaliers are set to face the two-time defending champion Golden State Warriors at Quicken Loans Arena on Wednesday night.