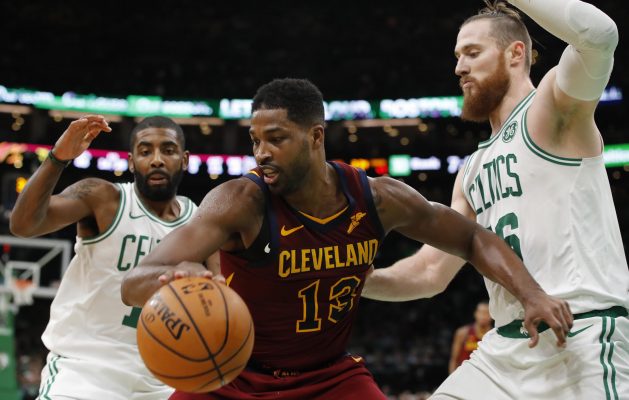 As the only player on the Cleveland Cavaliers roster who likely possesses the insight to offer such opinions, Tristan Thompson feels that comparisons between rookie Collin Sexton and veteran Kyrie Irving are unfair to the newcomer. The amount of pressure put on the shoulders of Sexton serves as the chief reason as to why Thompson requests such comparisons come to an end.

Thompson spoke after the Cavaliers’ loss in Boston on Friday about the burden that’s being placed on Sexton:

“That’s too much pressure. That’s like Golden State drafting some guard and expecting him to be Steph (Curry). That’s like drafting Zion Williamson and expect him to be LeBron James. Come on man. Let LeBron be LeBron. Let Kyrie be Kyrie. Let Collin be Collin. You know what I’m saying? It’s a disservice to the kid.”

Thompson was the fourth overall pick in the 2011 draft, three spots down from where the Cavaliers selected Irving as that year’s top overall selection. When Irving was traded to the Boston Celtics in August 2017, the Cavaliers received a first-round pick that was eventually used to select Sexton. Both players were seen as cornerstones of rebuilding Cavaliers franchises and both play point guard, making comparisons inevitable.

Yet due to the pressure involved, Thompson feels that allowing Sexton to chart his own course is the best approach:

“Kyrie, he did great things in Cleveland, close that chapter and let Collin write his own book. You keep trying to compare it’s not fair to the kid. If he lives in someone else’s shadow it’s not fair. He didn’t ask for where to get picked. They picked him. It’s unfair to him. Like chasing a ghost. That can hurt someone’s development. Let him be the best Collin Sexton he can be.”

In Friday night’s matchup between Sexton and Irving, the clear winner was Irving, who outscored the rookie 29 to 15, with each player collecting four rebounds and four assists. Irving’s performance wasn’t a surprise to Thompson, who believes it’s just another part of the learning curve for Sexton:

“Obviously he’s going to play with a chip on his shoulder especially going against Collin, but that’s just part of the NBA. Collin, he knows this already. He knows that guys are going to attack him every night. It’s a point-guard heavy league. Guys are going to go at you and he’s going to go right back at them, too. I wasn’t surprised Kyrie came out aggressive tonight. That’s what I expect from him.”

Irving didn’t truly begin to advance his career until LeBron James returned to Cleveland in 2014. Exactly when Sexton emerges from the shadow of Irving is still unknown, with that focus on comparisons likely to continue in the near future.