Don't Miss
Home / Media / George Hill on LeBron’s Return: ‘If You Boo Him, You’re an Asshole’

George Hill on LeBron’s Return: ‘If You Boo Him, You’re an Asshole’ 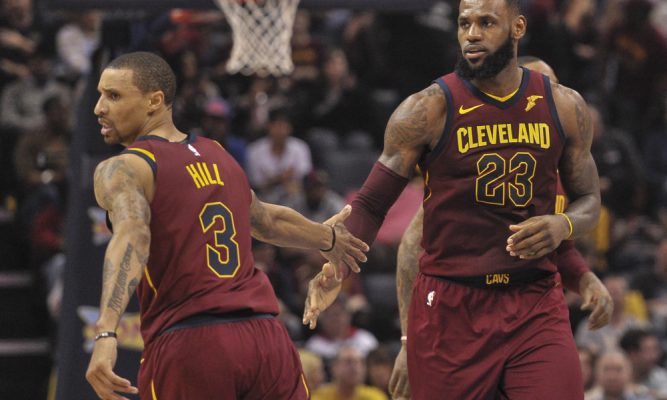 With former Cleveland Cavaliers forward LeBron James set to play his first game in Cleveland since leaving in free agency, his former teammate George Hill spoke about the potential reaction connected to that return. In no uncertain terms, Hill indicated that any negative attitude would be more of a reflection of an individual fan than of James.

Jason Lloyd of The Athletic looked at a variety of topics concerning the team, including James’ first game at Quicken Loans Arena since announcing his decision to join the Los Angeles Lakers. He quoted Hill’s blunt commentary about the possibility of James getting booed:

“If you boo him, you’re an asshole. He just means too much to this city, to this organization.”

Hill’s comment stems from the memory of the angry reaction of fans in December 2010, when James returned to Cleveland for the first time after having joined the Miami Heat. Deep bitterness about the veteran’s departure at that time resulted in a game-long cascade of boos and commentary directed at James.

“Hill has no animosity toward James for leaving. He deeply admires what James has accomplished both on and off the court and believes what he has done for kids in Akron — from his I Promise School to his agreement with the University of Akron to provide scholarships to his foundation kids who qualify — separates him from his contemporaries like Kobe Bryant and Michael Jordan.”

Despite Hill’s concern for how James will be received, it’s been clear that the situation will be much different than it was eight years ago. At that time, James received heavy criticism from all corners for making his announcement in a made-for-TV spectacle. This past July, he simply released a brief statement that included thanks to the team and the Cavaliers’ fan base.

Of course, the chief reason why the reaction to James will be more positive is because he helped deliver the franchise’s first NBA title in 2016. That permanently changed his legacy among the fans and organization.

In the latter case, the Cavaliers will be showing a tribute video that will recognize James’ contributions during his 11 seasons in a Cleveland uniform. One or more standing ovations from the fans is also a strong likelihood, with any negative reaction likely to be drowned out.