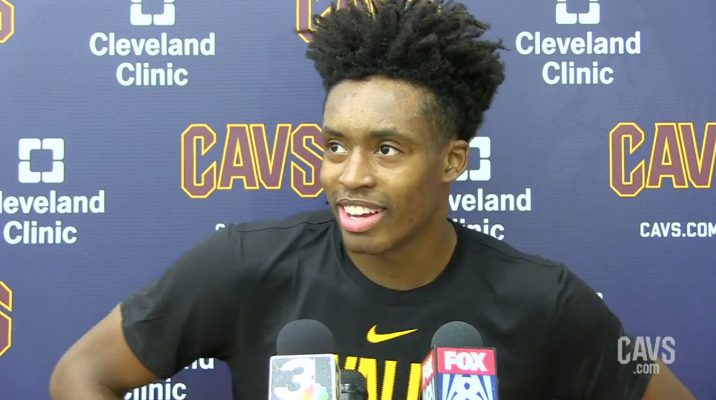 Any NBA rookie that’s set to compete in his first regular season game is itching to get on the court, a long list that now includes Cleveland Cavaliers rookie guard Collin Sexton. He’ll join his Cavaliers teammates on Wednesday night when they open up the 2018-19 campaign at Air Canada Centre against the Toronto Raptors.

“Yeah, I can’t wait to get out there. First game of the season, first NBA game, so I’m excited.”

Asked about how he’s approaching the season as a whole, Sexton spoke about growing into his role by producing on the court:

“Just continue to learn. Go out there when it’s my turn and do my thing when I’m out there.”

Concerning the prospect of the anticipation of that first game affecting his rest, Sexton has a plan in place:

“I’m gonna go to sleep for sure. Make sure I get a good night’s rest and a good breakfast.”

As the eighth overall player selected in this year’s NBA draft, Sexton is seen as a central piece in the Cavaliers’ rebuilding efforts. He’s presently situated behind veteran point guard George Hill, but should see playing time at backup before he eventually takes over Hill’s role. That change could occur as soon as this year, depending on the course of the Cavaliers’ season and the level of trade interest in Hill.

Having played just one year at the University of Alabama, the 19-year-old Sexton has shown no signs of being overwhelmed by the increased pace of NBA play. His performance during Las Vegas Summer League earned high praise, including his efforts on the defensive front.

Sexton’s potential is such that he’s a solid contender for the annual Rookie of the Year award. If he were to capture the prize, he’d join some select company in Cavaliers history. That’s because the only other two Cavs players to earn that selection were LeBron James in 2004 and Kyrie Irving in 2012.