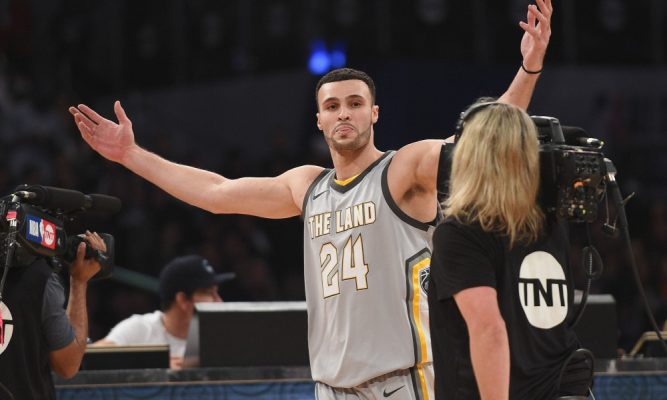 Having grown up in Northeast Ohio, the Cleveland Cavaliers‘ Larry Nance Jr. was excited last February about being traded from a prominent team like the Los Angeles Lakers to the Cavaliers.

Despite the subsequent loss of LeBron James from the Cavs roster to join those Lakers during the offseason, Nance remains thrilled to play for the team he grew up rooting for during his childhood.

Grant Segall of Cleveland.com conducted an interview with the 25-year-old Nance on a variety of topics, which included comparing life in Los Angeles to life in Cleveland:

“In L.A., everyone wants to be an actor. Everyone’s putting on a front, it seems. It comes with Hollywood and the whole show that is L.A.

“Cleveland’s almost the total opposite. People here aren’t flashy. They don’t show off. They’re salt of the earth Midwestern people, and I love that.”

The prospect of developing into a star in Los Angeles and then exploiting the increased endorsement opportunities that come with that high profile didn’t really appeal to the 6-foot-9 Nance, who’s starting his fourth year in the NBA:

“Obviously, L.A., New York, Chicago, the bigger markets have more of a draw. Guys have more marketing opportunities. But I was in a bigger market when I got traded to Cleveland, and I was thrilled. Even with losing Lebron, I’m so happy to be home. Not to knock L.A. I had a blast there. I loved my teammates and coaches. But there’s something to say about being home.”

Nance grew up in the Akron suburb of Bath and now lives there with his wife Hailey, who he married during the offseason. The home is just a few miles away from his parents: father (and Cavs legend) Larry Nance Sr. and mother Jaynee. Despite having roots in the Akron area, Nance looks at the situation of his current connection to Cleveland more broadly:

Playing collegiately at the University of Wyoming, Nance met his new bride while there, where she was a champion swimmer. Despite being far away from her native state, Nance says she’s adapted to her new surroundings:

“She was a small-town girl, so this is a pretty easy adjustment.”

One surprising fact about Nance that most fans likely aren’t aware of is that he has Crohn’s disease, which requires a special diet:

“I got diagnosed as a sophomore in high school. It’s been pretty stable since then. Once every 6 ½ weeks, I have to get an infusion of this drug called Remicade. It masks the symptoms.

“I like to use the platform I have as a professional athlete to educate people about Crohn’s and allow kids, mainly, to see that, even though you have a disease, it doesn’t mean your wildest dreams can’t come true.”

Despite now being part of a rebuilding franchise, Nance remains upbeat about the team’s future:

“You hate to lose a player of his caliber. At the same time, that opens up opportunities for other guys. We’re super excited at a chance to expand our roles, expand our games and show more than people have seen.

While the regular season gets underway for the Cavs next Wednesday night in Toronto, Nance may not be available for the contest after suffering a sprained ankle during Thursday’s team practice. A more definitive assessment about his status will likely be made next week.