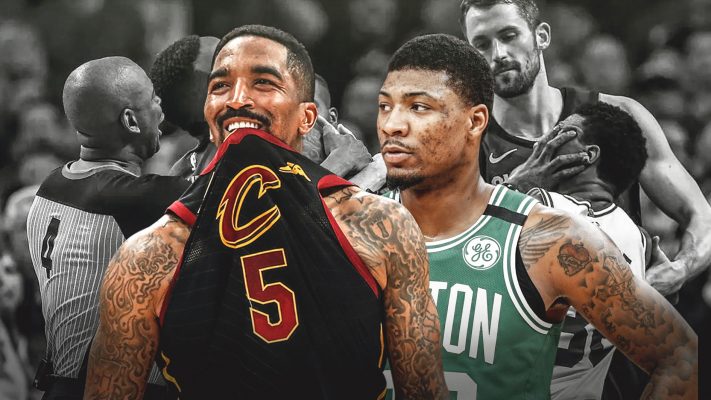 The regular season hasn’t even started, but Cleveland Cavaliers guard J.R. Smith is already in trouble.

On Monday, the NBA announced fines for Smith and Boston Celtics guard Marcus Smart for a scuffle that took place when the two teams battled on Saturday in a preseason contest:

During the first quarter of the Cavs’ 113-102 victory over the Celtics, Smith and Boston reserve Aron Baynes were jockeying for position in the post before the two players’ arms became tangled. Angered by the rough hand movement, Smith proceeded to shove the 6-foot-10 big man.

Coming to Baynes’ rescue was Smart, who pushed Smith from behind. The two hotheads went at it and almost got into an on-court fight until teammates and officials stepped in to prevent the skirmish from escalating further. While Smith was only assessed a technical foul, Smart was ejected from the game.

Although everything settled down for the remainder of the contest, the two guards continued to add fuel to the fire following the game. With Smart challenging Smith to meet him in the back, the Cavs veteran responded by telling the four-year pro to meet him in the streets.

Even with superstar LeBron James out of the picture, the two teams, who have met in the conference finals the past two years, still appear to have a rivalry on their hands. Although dynamics have changed, one thing for certain is that Smith is not going to back down from anybody.