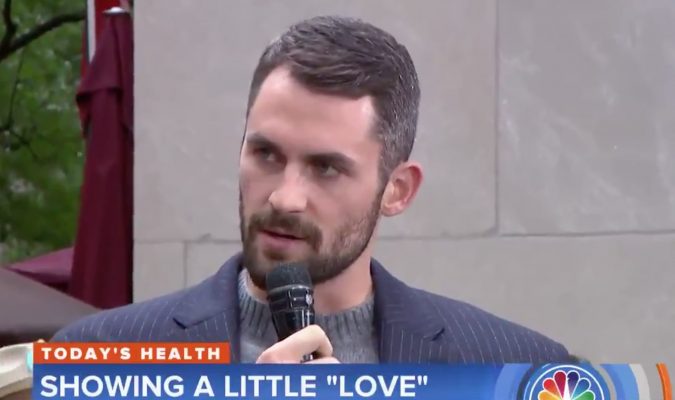 When Cleveland Cavaliers power forward Kevin Love opened up in March about mental health issues that he’s dealt with, he was applauded for bringing out into the open what’s often been a stigmatized disease.

Love has continued to further discussion over the ensuing six months and is now helping to establish a fund that seeks to keep the issue in the spotlight.

JUST IN: @kevinlove launches the Kevin Love Fund, with partners including Headspace, to focus on prioritizing mental health. Pushes the momentum forward. Proud to be a part of that work as well with @AllALittleCrazy programs & tour. pic.twitter.com/WlBJsas1Rq

The announcement by Love came during his appearance on NBC on Tuesday morning.

“We’re beating down the stigma as much as we can.”-@kevinlove dropped by to tell us about his new initiative to help people improve their physical and emotional well-being, the Kevin Love Fund pic.twitter.com/NRSH2CIccZ

“It’s going to empower people to really work on their physical, but also their mental well-being because we know that’s so huge.” Love said. “It’s really a special time. We’re beating down the stigma as much as we can.”

Love’s issues first publicly came to light in an article he authored for The Players’ Tribune in which he indicated that he’d been dealing with issues related to anxiety and depression. In the piece, he cited a Cavaliers’ game last November in which he was forced to leave the court because he was in the midst of having a panic attack.

As far as Love’s regular job as a member of the Cavaliers, he begins his fifth year with the team and 11th in the NBA on Sept. 25 when the team opens up its training camp for the 2018-19 season. Over the summer, he was able to clarify his NBA future by signing an extension with the Cavs that will pay him $120 million over a four-year period beginning next season.

In addition to that development, the pressures of Love’s job with the Cavaliers have also increased due to the departure of LeBron James. Love will need to increase his statistical numbers, which dipped last year to 17.6 points and 9.3 rebounds per game, and get support on that front from his teammates. Having unburdened himself with his revelations, Love appears to be up to that challenge.