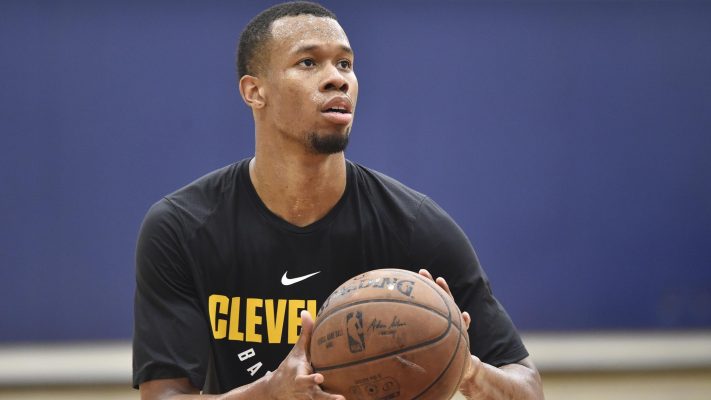 While the Rodney Hood contract saga was recently settled when he agreed to a one-year deal with the Cleveland Cavaliers, he could still leave as an unrestricted free agent next July. However, with the Cavaliers’ training camp set to get underway on Sept. 25, Hood is indicating that he’d ultimately like to sign a long-term deal with the team.

Hood spoke with Joe Vardon of Cleveland.com about the twists and turns he’s encountered since being acquired by the Cavs last February from the Utah Jazz. Nonetheless, he’s motivated to have a big year.

“I believe strongly in myself that after this year I’ll be able to make Cleveland my home and we’ll get a better deal next summer,” Hood said.

He also indicated that the controversy and lack of focus that largely defined the Cavaliers portion of his 2017-18 season stemmed from some personal matters and playoff pressure, though he’s focused on redeeming himself this year.

“It was a lot of stuff going on where I just couldn’t really focus, until the time where I really wasn’t playing,” Hood said. “And then I was able to lock in and get to myself.

“At first I kind of felt bad for myself, but then it was like I don’t want to feel this feeling again, sitting on the bench, or playing 8-10 minutes a game. I want to be a big part of a really good team, so that was my focus this whole summer.”

The personal matters were connected in part to his wife giving birth to twins on the morning of Game 2 of the Cavaliers’ opening-round series against the Indiana Pacers. That unfocused approach led to Hood averaging just 5.4 points per game during the postseason and connecting on just 17 percent of his attempts beyond the arc.

Hood then hit rock bottom in Game 4 of the second-round sweep of the Toronto Raptors when he refused to enter the game in the blowout victory. That led to him being removed from head coach Tyronn Lue‘s rotation until the last two games of the NBA Finals and no doubt resulted in his lack of viable offers when he became a restricted free agent.

Not helping matters in negotiations were his expectations in the NBA marketplace:

“Hood was looking for a deal in the $10 million to $12 million range,” Vardon wrote. “The Cavs weren’t going to go there, either, but they offered him a multiyear deal for about $7 million per season, sources said.”

Ultimately, Hood accepted the $3.4 million qualifying offer that the Cavaliers had to make in order to retain his restricted free agent status. The move does allow him to become an unrestricted free agent in a little over nine months, with Hood holding no grudges about how things turned out.

“My twins were born here,” Hood said. “I like the community, even though I haven’t been out there a lot. I want to make this a home. It’s just didn’t happen this summer. That’s how I look at it.”

Hood’s agent, Travis King, also sought to put a positive spin on Hood’s move and his future with the Cavaliers:

“Just because he signed the qualifying offer, he’s not on the first train out of here,” King said. “He plans to stay in Cleveland.”

Given the massive hole left by the departure of LeBron James, the opportunity for Hood to show his true potential exists. Putting up numbers anywhere remotely close to what James delivered would give him a strong negotiating stance with the Cavs, who would be much more inclined to meet those demands as they continue to rebuild for the future.