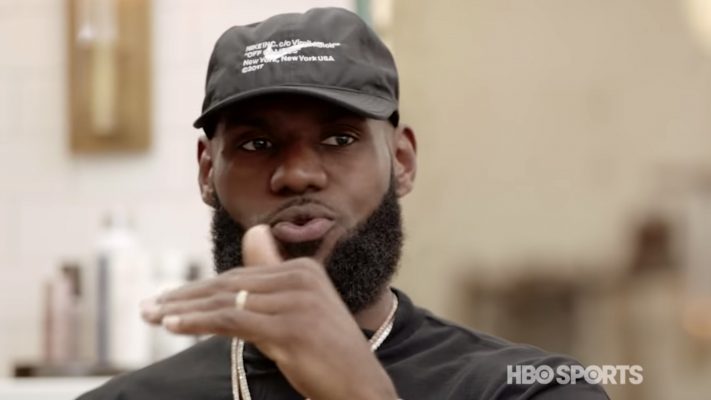 Former Cleveland Cavaliers forward LeBron James has become quite vocal on a multitude of issues as of late.

Most recently, on an episode of HBO’s “The Shop,” James discussed how he grew up distrusting white people due to being “institutionalized” while growing up in his hometown of Akron, Ohio.

LeBron talks about the transition from his neighborhood to his catholic high school, being around all white people for the first time and finding out what a pantry is pic.twitter.com/BhIpxsC5xJ

“I went to an all-white Catholic high school. When I first went to the ninth grade in high school, I was on some, ‘I’m not f—— with white people.’ I was so institutionalized growing up in the hood. It’s like, ‘They don’t f— with us, they don’t want us to succeed,'” said James. “I’m going to this school to play ball and that’s it. I don’t want nothing to do with white people. It’s me and my boys going to high school together, we here to hoop. So that was my initial thoughts and my initial shock to white America when I was 14 years old.”

Although James is no longer a member of the Cavs, his roots still lie deeply within the city of Cleveland and the noise he makes off the court will likely always tie back to his hometown.

The four-time MVP is now a part of the Los Angeles Lakers, however, those in Northeast Ohio will never forget his breaking the city’s 52-year championship curse in 2016.