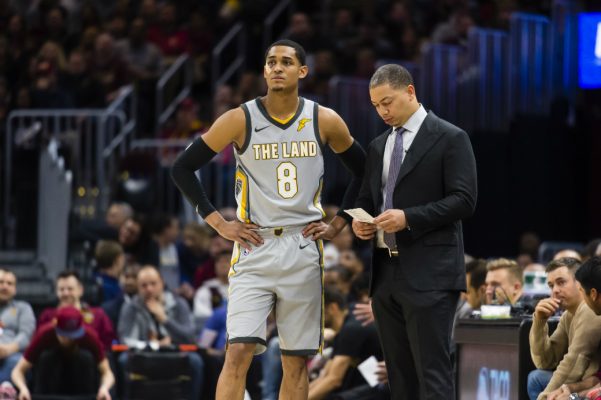 When Cleveland Cavaliers head coach Tyronn Lue was elevated to his current position following the dismissal of David Blatt in January 2016, he faced the immediate challenge of winning an NBA title. He accomplished that feat, which earned him a lucrative five-year contract, but in the post-LeBron James era, he has to find a way to mix new and younger players with the seasoned veterans that remain.

The challenge ahead is a new one for Lue, with diminished expectations in the wake of James’ departure in free agency. Those perceptions pertain to the likely end of trips to the NBA Finals, which the Cavaliers managed to do in each of the past four years.

“I don’t know [how to mix young and old] because we’ve never had that challenge before,” Lue said. “I think it will be good because we have some good vets and we’ve always been surrounded by good vets. I know what we will continue to do is continue to build the culture. I think since LeBron came back, [owner] Dan Gilbert has surrounded him with great players, great veterans who are good for the culture. Our main focus this summer is continuing to keep building these guys up but also continuing to build the culture we had the last four years [four NBA Finals appearances].”

Unlike the disaster that awaited the 2010-11 edition of the Cavaliers when James left before, this season’s roster still has plenty of talent. Besides the remaining veterans, some of those younger players, like Jordan Clarkson and Larry Nance Jr., came in at midseason and had to learn the Cavaliers’ system on the fly. Rodney Hood would also fall into this category, though he still remains unsigned.

Adding to that is the team’s top pick, Collin Sexton, and the intriguing potential of both swingman Sam Dekker and guard David Nwaba. In short, while uncertainty about what to expect currently reigns, Lue isn’t fearful about the immediate future.

“Of course I would love to have LeBron James, but now that he’s gone it’s going to be a new challenge,” Lue said. “I think me and my coaching staff, we’re up for it. It’s going to be different, a lot of young guys that we can try to teach and mold them how you want them to be.

“I think when LeBron came back [from Miami] and we traded for Kevin Love, we didn’t have any draft picks — all veteran guys who could play now and understand how to play and how to win and what it took. Now, having made the trades we made during the season and acquiring some young talent through the draft, it will be a different challenge for us. I’m already excited about it.”

Whether or not the eventual roster constitutes a playoff team remains to be seen, with Lue fully aware of the inevitable bumps the team will face in the season ahead.

“We’re going to have a young team and there’s going to be growing pains, but I think we have enough talent to make the playoffs,” Lue said. “But not knowing what’s going to happen during the course of the season, the most important thing is to keep building that culture, playing the right way.”

Having James on his roster virtually guaranteed a long playoff run for the Cavs, but it also brought plenty of pressure onto the shoulders of Lue. It also brought with it the belief of critics that he was simply doing James’ bidding. That pressure took a toll on Lue’s health last season, forcing him to take a nine-game hiatus late in the regular season.

Lue has a new perspective for the upcoming season, which has him eagerly awaiting the start of training camp next month:

“I’ve grown to love it and it’s been fun. Now is a different challenge. I’m up for it. I think our coaching staff is up for it. [General manager] Koby Altman is up for it as well. I’m doing well, I feel good, doing the right thing, continuing to eat better, continuing to work out and I feel good. And as long as that continues I’ll be fine.”

Cavaliers fans have had nearly two months to absorb the loss of James and also dial back their expectations of the near future. Given that the man tasked with forging that new path hasn’t given up hope should offer those fans some solace in the year ahead.