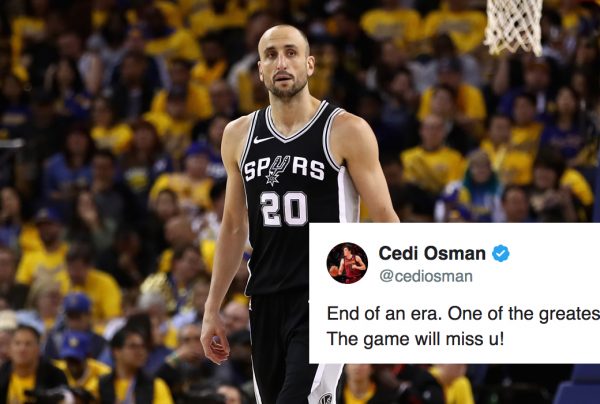 Cedi Osman is set to begin his second season with the Cleveland Cavaliers next month, having shown solid hints of potential during his rookie campaign last season. On Monday, the Macedonian-born Osman took time to pay tribute to another international player, San Antonio Spurs guard Manu Ginobili, who announced his retirement from the game after a stellar 16-year career in the NBA.

End of an era. One of the greatest. Thank you for all you’ve done. The game will miss u! https://t.co/UTybV6V2sY

During his time with the Spurs, the Argentinian-born Ginobili was an integral part of four title teams. He was a second-round pick of San Antonio in the 1999 NBA Draft, the 57th player selected overall.

Like Ginobili, Osman also spent a few years overseas before joining the NBA. He was drafted in the second round of the 2015 NBA Draft by the Minnesota Timberwolves as the 31st overall selection, but was acquired that same night by the Cavs. After two seasons of international play, he officially signed with the Cavaliers on July 18, 2017.

The 23-year-old Osman started 12 of the 61 regular season games he played in for the Cavs last year. In those contests, he averaged 3.9 points and 2.0 rebounds, numbers that don’t particularly stand out. However, he gained invaluable experience during his time on the court, which will be put to good use this year, when he’s expected to carve out a bigger role for the revamped Cavs.