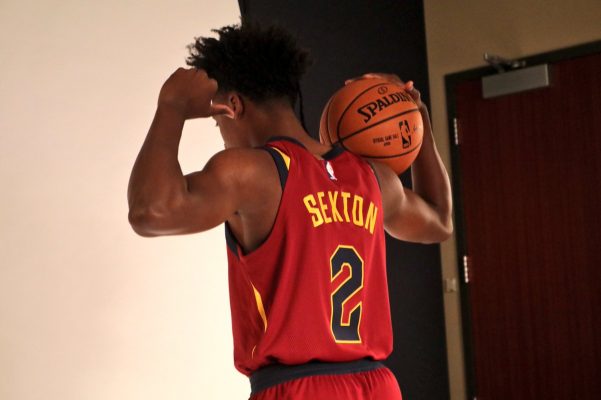 When Cleveland Cavaliers rookie guard Collin Sexton was selected by the team in June’s NBA draft as the eighth overall selection, he was seen as a key building block in the franchise’s future. In his widely hailed Las Vegas Summer League performance, he showed some of the talents he’ll be bringing to Quicken Loans Arena and other NBA courts.

On Thursday, the Cavaliers had a photo shoot of Sexton adorned in his new jersey. The event took place at the Cleveland Clinic Courts, the team’s practice facility:

While this shoot was largely for the team’s purposes, the media will have their opportunity in a similar event that takes place late next month when the Cavs open up their training camp.

The Cavaliers roster will see a large number of new faces when that camp opens, though the absence of LeBron James will be the most talked about aspect on that day. Yet the development of Sexton over the course of his first year in the league will offer Cleveland fans an intriguing option as they readjust their expectations from an NBA Finals appearance to the start of a rebuilding project.

The good news is that this effort doesn’t figure to look anything like the last time James left in free agency back in 2010. At that time, the remaining talent was limited, the Cavaliers had no first-round pick to build upon and the Cavaliers had installed a new head coach, which led to a disastrous season. In this instance, Cavs head coach Tyronn Lue and his staff are relishing the challenge of developing Sexton into a potential NBA superstar of the future.