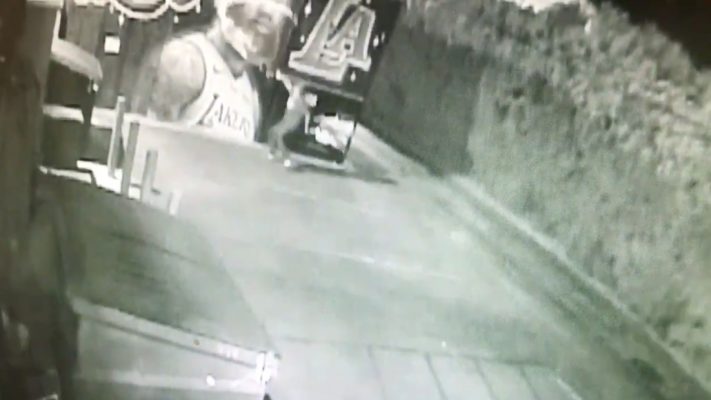 LeBron James was likely expecting a hero’s welcome when he decided to leave the Cleveland Cavaliers to join the Los Angeles Lakers earlier this month. It is beginning to become quite clear, however, that some in L.A. are not so pleased with their team’s newest star.

Just a couple days after a mural depicting James in a Lakers uniform was first vandalized, another hater decided to put his mark on the mural as well.

On Wednesday, an L.A. news anchor shared a surveillance video of the mural being vandalized once again by one of James’ fellow Angelenos.

#BREAKING: This is the video of vandal defacing @KingJames mural at stroke of midnight this am in #Venice. Video from @BabyBluesBBQ surveillance cam. @Lakers @NBCLA. pic.twitter.com/gNPeUrF8fW

According to Los Angeles’ ABC 7, artist Jonas Never has now opted to paint over his own work because he doesn’t have the time to fix it. While some will clearly celebrate the disappearance of the mural, others will miss it.

Either way, it seems clear that James’ decision to join that Lakers has been received with mixed feelings. It will be interesting to see how that changes once the four-time MVP takes the court and gets to show the city of Los Angeles how special he really is.