Report: Cavs Not Expected to Blow Up Team If LeBron James Leaves 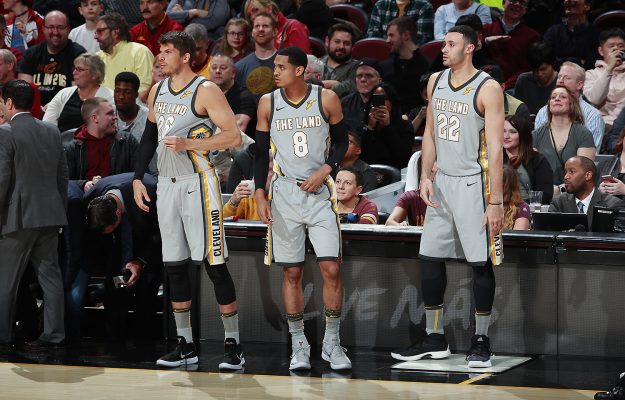 The departure of a star player on any NBA team can force the entire organization into an unexpected identity crisis. Losing the face of a franchise often forces general managers and team owners alike to feel the need to blow up their team and start from scratch.

While that certainly could be an option for the Cleveland Cavaliers in the event that LeBron James opts to sign elsewhere this summer, it seems as though they plan on going a very different route.

According to  recent report by Cleveland.com’s Terry Pluto, fans should not expect the Cavs to nosedive in an attempt to acquire early draft picks in upcoming seasons.

“As of now, the Cavs’ plan is not to ‘blow up the team,’ regardless of what James decides to do,” Pluto wrote. “I’m talking about an extreme Philadelphia-style demolition job of aiming to lose lots of games and pile up draft picks.”

Pluto went on to explain what the Cavs plan to do with many of the players they could trade away if they were to decide to blow up their roster and begin the rebuilding process.

“The acquisition of Larry Nance Jr., Jordan Clarkson, Rodney Hood and George Hill operated on two levels,” he wrote. “The first was to help the Cavs return to the NBA Finals. That happened. The trades energized James and some of the other veterans on the roster. Hill and Nance had some good moments in the playoffs. And when Hill struggled, so did the Cavs.

Pluto went on to explain that while Nance has already drawn a lot of trade interest, the Cavs appear committed to keeping the young forward on their roster, and will likely try to work out a contract extension with him. He also discussed Rodney Hood, whose presence on the roster still holds value despite the many struggles he endured when he was traded to the Cavaliers midseason.

“Hood is a restricted free agent. It will be fascinating to see what will be the market for the 6-foot-8 guard,” Pluto wrote. “He had a miserable experience with the Cavs. The team believes the 25-year-old Hood could thrive with a fresh start from day one of training camp. I expect they’ll give him the $3.4 million qualifying offer, meaning the Cavs will be in position to match any offer he receives from another team.”

Finally, Pluto touched on another young asset that the Cavs have a lot of confidence in going forward:

“The Cavs also believe Cedi Osman can be a solid role player on a team with or without James. Osman is like Nance. He loves to defend. He has endless energy. He is unselfish. And like Nance, he has been attracting trade attention. Osman is only 23.”

Despite all the intriguing role players, Pluto wanted to make one thing clear: James’ potential departure will have a huge impact on the team.

“I’m not trying to sell anyone on the fact that Cavs will be just fine if James leaves,” he wrote. “The future Hall of Famer has carried the franchise for four years. He is the greatest player of his generation…and perhaps the greatest ever. The reason I’m writing about the current roster is because that’s what we know the Cavs have to work with right now.”

If James does leave, and the Cavs do commit to the core they currently have, it will be fascinating to see who is able to rise to the challenge, and who buckles under the increased pressure.