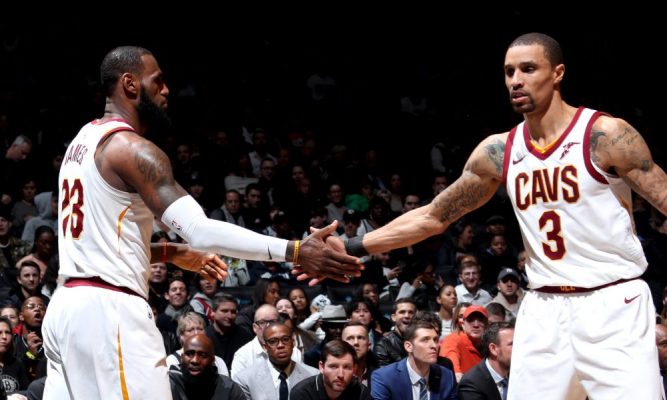 The Cavs are currently down 0-3 in the best-of-seven series against the Golden State Warriors, even though James has averaged 37.7 points, 9.0 rebounds, and 10.7 assists in 46.3 minutes a night in the first three games of the Finals.

In an interview, Hill looked upset when a reporter asked him whether James has offered him and his teammates any advice to lift them up from their current situation. The veteran point guard smirked a little before responding.

George Hill has LeBron's back. pic.twitter.com/RnYNABK8Ot

“You guys (the media) are acting like he doesn’t… you act like he don’t do those things,” Hill said. “He is doing more than enough.”

Hill continued to say that James has daily conversations with each member on the team. He also said that the King breaks down film and shoots with his Cavaliers teammates every day prior to games.

“He does everything he’s supposed to do. You guys can say he doesn’t do enough, but we say he does more than enough,” said Hill. “At the end of the day, we look at ourselves in the mirror and say, ‘What can we do more to help him?’ It’s not always on him, it’s us, too.”

Hill then said that he is not afraid to own up to his mistakes and get better next time. He implied that he accepts it when he sometimes plays a subpar game. However, hearing criticisms about how James does not do enough for the team upsets him.

The Cavs acquired Hill along with Rodney Hood during last February’s trade deadline via a three-team trade with the Utah Jazz and Sacramento Kings. He has brought stability at the point guard position, especially in the postseason.

However, Hill missed what would have been a game-winning free-throw attempt during the last seconds of Game 1 against the Warriors.