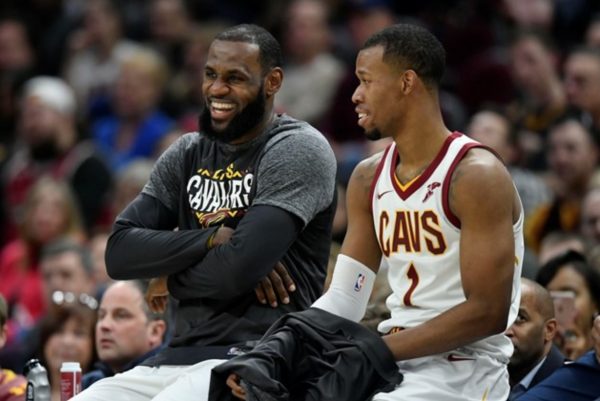 LeBron James and the Cleveland Cavaliers have very little to smile about following their heartbreaking Game 3 loss on Wednesday night. After leading for much of the first half and battling with the Golden State Warriors for much of the second, the Warriors’ offense proved too great to overcome.

Despite the 110-102 defeat, James took time out of his postgame press conference to praise teammate Rodney Hood on his performance that helped the Cavs very nearly get the win.

LeBron: "I thought Rodney Hood was Rodney Hood tonight. He was aggressive from the beginning when he got in the game. … He continued to push with his athleticism and his length around the rim. That was a huge moment for himself."

James’ comments may have been something of an understatement considering the way Hood had performed in the playoffs up until Wednesday night.

After not playing in either of the final two games of the Eastern Conference Finals or the first game of the NBA Finals, and playing just four minutes in Game 2, Hood finished Game 3 with 16 points, six rebounds, and two blocks on 26 minutes of play.

Sadly, Hood’s efforts didn’t result in a win. Now the Cavs are on the brink of losing to the Warriors for the third time in four Finals matchups. Still, the Cavs are sure to not go down without a fight. They would be wise to give Hood another sizable workload in a must-win Game 4 on Friday night.

cleveland cavaliersfeaturedlebron jamesnews tickerRodney Hood
← Previous Story Charles Barkley on the Cavs: I’ve Never Seen a Team So Dumb in My Life
Next Story → Veteran Cavs Player Says ‘We’d Be Up 3-0 If Kyrie Was Still Here’