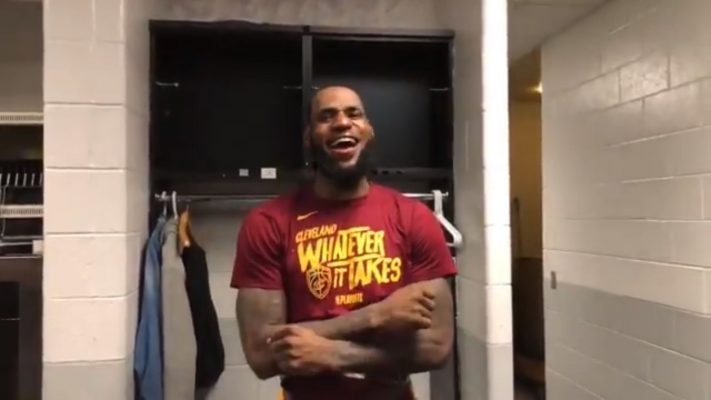 After winning the seven-game series against the Boston Celtics with an 87-79 Game 7 triumph, the Cleveland Cavaliers had plenty of reasons to celebrate their fourth straight Eastern Conference championship. The victory also propelled the Cavs to the NBA Finals with a chance to win their second championship in three years.

LeBron James was celebrating with his teammates in the locker room moments after the game had ended. In the video captured by NBA.com’s official Twitter account, the three-time NBA Finals Most Valuable Player was whooping it up with the team as they chanted their mantra.

“Automatic work” is the team’s unofficial motto and their go-to chant in the locker room. The two words are inscribed on the interior of their 2016 championship ring.

The Cavaliers have already played their 100th game this season with James appearing in every one of them. The Celtics series, in particular, showed everyone how physically taxing this season has been for James.

In Game 5, he was visibly out of gas at the end and seemed to be taking plays off just to rest. He played 46 minutes the following game but still came up big with 46 points to send the series to a seventh and deciding game. Finally, in Game 7, James played all 48 minutes but was able to pace himself well, coming up big for the team during the most important moments of the game.

James scored 35 points, snared 15 rebounds and dished out nine assists in another epic performance that underscored his status as the best player in the game today.