Don't Miss
Home / Media / LeBron’s Response to Tracking Data Saying He’s Slowing Down: ‘That Tracking B——- Can Kiss My A–‘

LeBron’s Response to Tracking Data Saying He’s Slowing Down: ‘That Tracking B——- Can Kiss My A–‘ 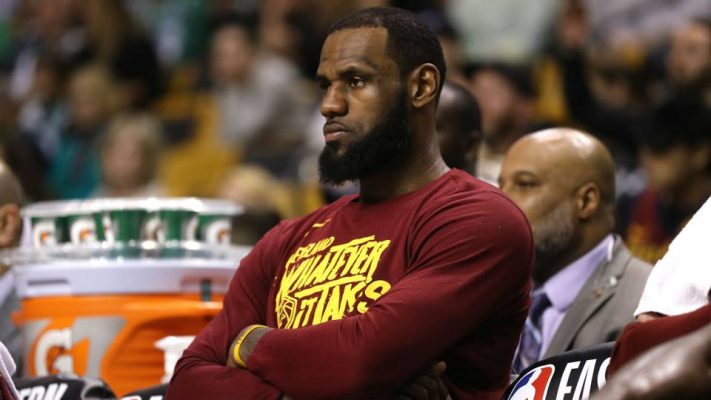 After 15 years in the NBA, LeBron James continues to show that he is a physical specimen unlike any other. His combination of size, speed, skill and strength are virtually unmatched by any single player in league history. At his size, listed at 6-foot-8 and 250 pounds, he is one of the fastest players the game has ever seen.

No one contests this fact, except the league’s tracking system apparently.

What we are seeing from James at age 33 may actually just be a shadow of what he once was. Sure, there are moments when the Cleveland Cavaliers superstar runs the length of the court faster than anyone else, but in truth, he’s one of the slowest players on the floor when considering his speed in miles per hour throughout the game.

According to Jason Lloyd of The Athletic, the data suggests that James moves slower than everyone else on the court in their Eastern Conference Finals series against the Boston Celtics:

“It’s hard to believe, but according to the league’s tracking data, no one on the floor is running slower in this series than James, who is also the second-slowest in this entire postseason. He entered Game 4 with an average speed of 3.64 mph in this series, which is down from his 3.73 mph for the entire postseason (tracking numbers weren’t immediately available for Game 4 on Monday).”

ESPN’s Brian Windhorst ran a similar article nearly three weeks ago that suggests that James is conserving energy while on the court by choosing when he runs and when not to:

“No one would ever call James slow, but he is when he wants to be. During the regular season, James’ average speed during games was 3.85 mph, according to Second Spectrum tracking data.

“Of all players who averaged at least 20 minutes a game, that ranked in the bottom 10 in speed. That’s correct: James moved slower than just about any rotation player in the league. And since the playoffs started, James has gotten even slower. His average has slipped to 3.69 mph.”

When told of the data after Game 4 in which he scored 44 points to tie the series at two wins apiece, James was incensed, to say the least.

“That’s the dumbest shit I’ve ever heard,” James told The Athletic after his 44 points evened this series at two games each. “That tracking bullshit can kiss my ass. The slowest guy? Get out of here.”

James continued by saying how his league-leading minutes per game throughout the regular season and the playoffs may explain why he seems slower than he really is throughout the game.

Perhaps James needs to look at the data more objectively and see that it isn’t suggesting that he is slow when he runs, but more like he doesn’t run and sprint all the time. He paces himself which is exactly what he told Windhorst in the ESPN piece.

The suggestion that he’s one of the slowest players in the NBA may just be the motivation that the four-time MVP needs to reach even greater heights in Game 5 when the Cavs face the Celtics once again at TD Garden.