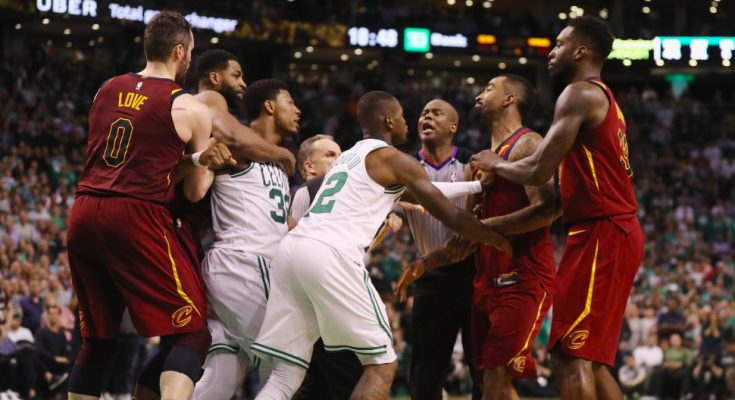 The controversial late-game push of the Boston Celtics‘ Al Horford by Cleveland Cavaliers guard J.R. Smith in Game 2 of the Eastern Conference Finals resulted in a near melee breaking out. Before he was stopped by other members of the Cavaliers, Horford’s teammate Marcus Smart seemed intent on taking a swing at Smith, anger that was still evident during Smart’s postgame remarks.

Marcus Smart said he got mad at JR Smith’s foul because Horford was defenseless in the air: “That’s a dirty shot. … it’s not the first time JR has done dirty stuff, especially playing against us.”

The incident that Smart referenced dates back to Game 4 of the 2015 first-round playoff series between the Cavaliers and Celtics. That was when Smith delivered an elbow to the head of then-Celtics player Jae Crowder, thereby being assessed a flagrant-2 foul and being ejected from that game. In addition, because of past disciplinary issues, Smith was given a two-game suspension.

Smith’s behavior at the time was seen as a retaliatory reaction to former Celtic Kelly Olynyk dislocating the shoulder of the Cavaliers’ Kevin Love, who missed the remainder of that postseason after being injured during the first quarter of that same game.

In that 2015 series, the Cavaliers swept the Celtics in four straight games. However, three years later, it’s the Cavs that are now in danger of being swept. They trail in the series 2-0 and have two games in Cleveland to try and deadlock the series and turn it into a best-of-three battle. Failure to accomplish that task puts the Cavaliers in a position of potentially having to win two games at TD Garden, where the Celtics have won all nine postseason games this year.