Video: LeBron Shows Off Secret Handshakes With Sons After Sweep 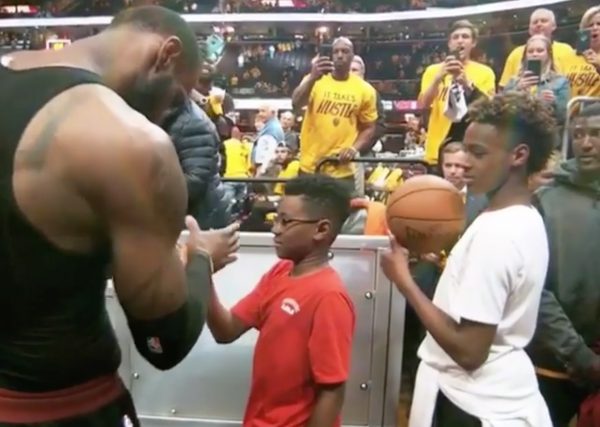 Long before the final buzzer sounded, the Cleveland Cavaliers‘ 128-93 rout of the Toronto Raptors in Game 4 of the Eastern Conference semifinals had been decided. That completed a four-game sweep of the series and gave LeBron James plenty of time to plot out the postgame handshakes he and his two sons would perform after the game.

Those two sons, LeBron Jr. and Bryce, were at the game when it ended, though their sister, Zhuri, was likely asleep by that time. However, she was captured on video in a tender moment with her father prior to the start of the game.

James’ children presumably won’t be making the road trip for the Cavaliers’ next two games to start the Eastern Conference Finals, which will likely get underway on Sunday. The expectation is that the destination will be Boston, with the Celtics currently holding a 3-1 advantage in their series against the Philadelphia 76ers and playing Game 5 at home in the TD Garden. If the Celtics do clinch the series, the matchup against the Cavs would be a rematch of last year’s conference finals, which the Cavaliers won in five games.