Video: Celtics Ask for LeBron After Going Up 3-0 Against Sixers 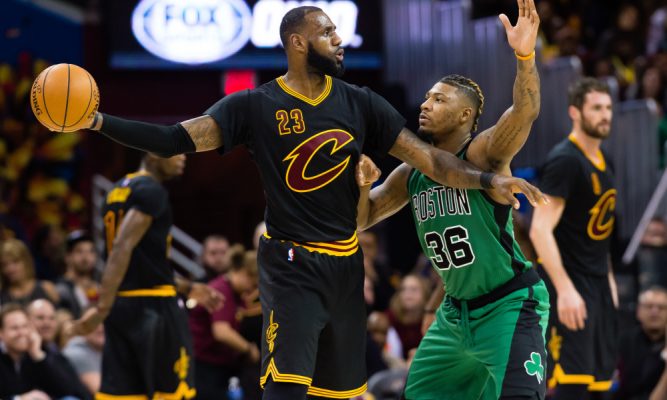 Entering Saturday night’s Game 3 in the Eastern Conference semifinals, the Cleveland Cavaliers are in a strong position to reach the conference finals because of their 2-0 lead in the series against the Toronto Raptors. Their next opponent will most likely be the Boston Celtics, who took a commanding 3-0 lead in their series over the Philadelphia 76ers on Saturday night and appear to have an air of cockiness about meeting up with Cavs superstar LeBron James in the next round.

This was the scene as the Celtics made their way to the locker room after defeating the 76ers in Game 3:

Sounds like the #Celtics are looking for LeBron… ? pic.twitter.com/hS6H98CG7B

The Celtics will be missing two key players in Gordon Hayward, who was lost for the season on opening night, and former Cavaliers point guard Kyrie Irving, who was ruled out for the postseason last month. Since James returned to Cleveland in 2014, the Cavs and Celtics have faced each other twice in the playoffs, with the Cavaliers winning eight of nine contests.

James has been playing at an MVP-level pace all season long, including a 43-point performance in Game 2 of Cleveland’s series against Toronto. The 15-year veteran has never been afraid of using such remarks as fuel against his opponents, which means that those Celtics making such comments may end up regretting them in a few weeks.