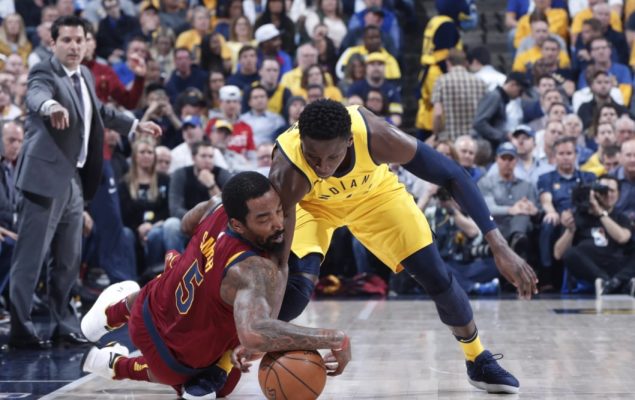 During the course of the 2017-18 NBA regular season, the Cleveland Cavaliers‘ defense was the target of almost constant criticism, with the team routinely struggling to get stops. However, in the first four games of the postseason, the Cavaliers have shown solid improvement in this area and rank fourth in defensive efficiency among the 16 playoff teams competing.

The category of defensive efficiency is defined by the number of points a team allows per 100 possessions, with the Cavaliers currently at 101.9 per game. That number and ranking is in stark contrast to their regular season number of 109.5, which placed them 29th among the NBA’s 30 teams. The lone team worse than them was the Phoenix Suns, who finished with the league’s worst record at 21-61.

At present, the only three teams ahead of the Cavaliers when it comes to playoff defensive efficiency are the Indiana Pacers (100.8), Utah Jazz (101.1) and Golden State Warriors (101.6). The Pacers, of course, are the team they’re currently pitted against, with each team having won two games in the best-of-seven series.

In Cleveland’s four games with Indiana, the team’s defensive concerns have largely centered on limiting damage from 3-pointers and trying to protect the paint. Their two losses were in Game 1 and Game 3, with the Cavaliers quickly falling behind in the first game and being unable to forge a comeback. The other defeat was the result of a second-half collapse that wasted a 17-point halftime lead.

Keeping up this improved play is vital to the Cavaliers moving forward in the postseason, which brings to mind the adage that defense wins championships. Of course, delivering on offense is also part of the equation, with Sunday night’s Game 3 victory showing that supplementing the outstanding performance of LeBron James can help put games in the win column. Finding a way to combine both could lead to another extended postseason run.