J.R. Smith Says He Hasn’t Heard Back From Kyrie Irving After Reaching Out 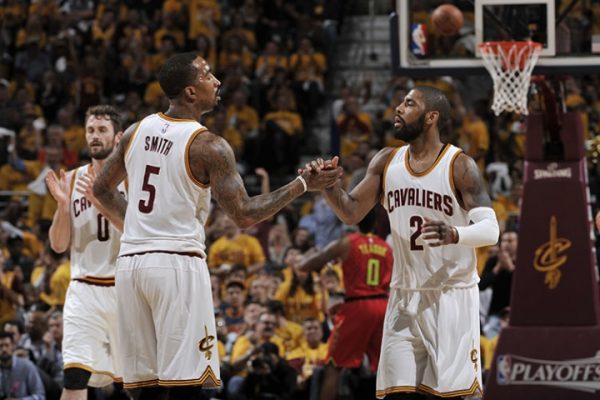 Kyrie Irving may no longer be a part of the Cleveland Cavaliers family, but that doesn’t mean some of his former Cavs teammates no longer consider him a brother. On Friday, Cavs guard J.R. Smith joined “The Victor Cruz Show” to discuss LeBron James‘ place in NBA history, Stephen Curry’s shooting, and more.

One of the other topics Smith and Cruz touched on was Smith’s relationship with Irving now that they are no longer suiting up together. Smith explained that while he has reached out to Irving after it was announced that his first season with the Boston Celtics would have to end prematurely due to a recent knee surgery, Smith has not yet heard back from his former teammate.

“I haven’t. I’ve reached, Kyrie is different, I’ll say that. Kyrie is extremely different. Not in a bad way, it’s just the way he is. There’s nothing wrong with that as long as you’re consistent about it. One thing about him, he’s going to be consistent on who he is,” Smith replied when asked if he’s heard back from Irving. “When I was coming up I would play against Kobe [Bryant], and throw a little jab at him or something like, ‘Yo, what’s going on? Can I work out with you?’ He would give me no response, like none. I would see that in Ky. Young guys would come up to him and he would give them a stale face.

“I don’t take it personal, but I’ve reached out to him. Obviously I ain’t get no response, but that’s like my kid brother. I love the kid.”

It seems Smith was not overly surprised by Irving’s lack of response and does not take the silence as an indication of any change in their friendship.

Regardless of how Irving’s career ended in Cleveland, there is no doubt that he holds a very special place in the hearts of his former teammates and many Cavs fans as well. Irving will always be remembered as one of the stars that played an integral role in bringing an NBA championship to Cleveland.

Hopefully Smith gets his reply soon, and hopefully Irving is already well on his way back to a full recovery. Meanwhile, Smith and the rest of the Cavs will look to make their fourth straight trip to the NBA Finals and prove that they can bring another championship to Cleveland without Irving’s immense talent.