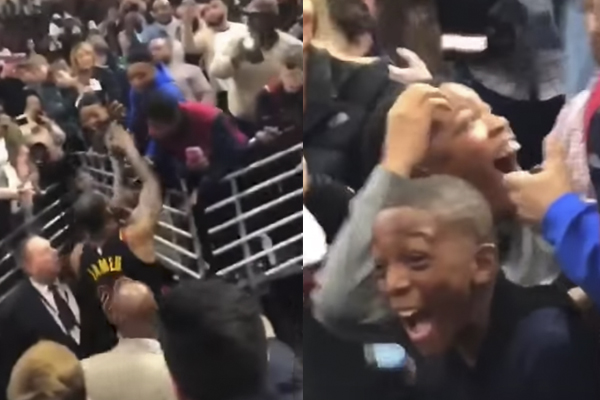 LeBron James has been making a habit of doling out his game-worn arm sleeves to young fans as of late.

Earlier in the week, James made news by giving his sleeve to a fan who was holding a sign in support of the four-time MVP. Then, after the Cleveland Cavaliers‘ win over the Chicago Bulls on Saturday, James made another young fan’s day after he became the lucky recipient of his arm sleeve.

In a video caught after the game, the young boy tears up over his disbelief of receiving the priceless memento.

“I got it!” the young fan said before hugging his mother. “I actually got it.”

With all of the drama and uncertainty surrounding James and the Cavs at the moment, this video serves as a fantastic reminder that in the end, basketball is for the fans.

With quite a bit of the season left to go, the NBA icon will likely be making many more memories for young fans all over the country with actions similar to this one.

Hopefully, once the postseason rolls around, James will manage to make Cavs fans everywhere cry tears of joy, by bringing home another NBA championship.