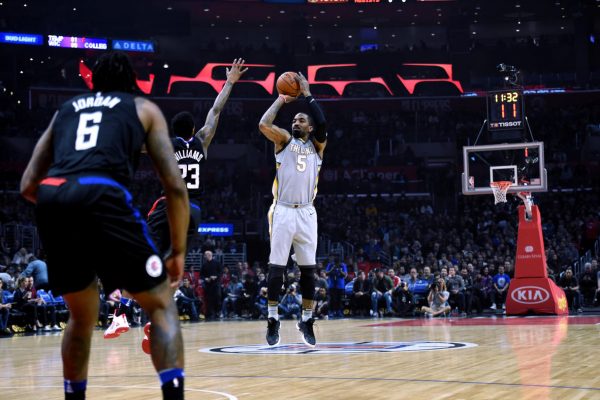 (Los Angeles, CA) — Continually being stymied in their effort to come back from an 18-point first-quarter deficit was too much for the Cleveland Cavaliers as they dropped a 116-102 decision to the Los Angeles Clippers at Staples Center on Friday night. The Clippers dished out 25 assists and had a 25-8 edge in second-chance points, two reasons why the Cavs’ brief two-game winning streak came to an end.

In addition to the defeat, the contest also saw one of the Cavaliers’ newest players, Rodney Hood, leave the game after just six minutes due to a strain of his lower back, while rookie Cedi Osman suffered a left hip strain. Their absences further depleted a lineup that was already missing two key players.

“It messed up our rotations a lot,” Cavs head coach Tyronn Lue said after the game. “But it’s part of the game, it has to be next man up.”

LeBron James collected another double-double by leading all scorers with 25 points, also grabbing 10 rebounds and handing out six assists. Jordan Clarkson added 21 points off the bench, while three other starters were the only other players to score in double-figures. Larry Nance Jr. picked up a double-double by scoring 16 and hauling down 12 boards, while J.R. Smith added 15 and George Hill contributed 10 on the night.

“Everybody has to step up,” James said. “We had some breaks that didn’t go our way. I thought we had our chances, we had some runs, but they were able to combat those runs.”

The first two minutes of the game saw the Cavaliers take an early 7-4 lead, making three of their first four shots from the field. However, the remainder of the period belonged to the Clippers, with the Cavs shooting just 28 percent (5-of-18) from the field over the final 10 minutes of the quarter.

Committing no turnovers and handing out 10 assists during the period aided Los Angeles during their 31-10 run. That gave them a commanding 35-17 advantage when the horn sounded, once again putting the Cavaliers in a huge hole.

“They came out and hit us and we had to climb a mountain after that,” Nance said.

In the second period, the Cavs twice managed to get their deficit down to 10 points, but a 12-3 Clippers surge pushed the margin back up to 19 at 56-37. By the time intermission arrived, Cleveland managed to chip away slightly to trail 61-47 at the break.

During the early moments of the third quarter, the Cavaliers were able to get no closer than nine points, Seemingly watching the game slip away as the Clippers went on a 13-6 run to hold an 81-65 lead with four minutes to play in the period, the Cavs roared back with 12 unanswered points. Despite that push, the Clippers tallied the final four points to make it an eight-point deficit at 85-77 with one period left.

The Cavaliers managed to shoot 67 percent from the field during the third, but a slow start to the last quarter doomed their chances of completing the comeback. Los Angeles put together an 11-4 run in the first three minutes to take a 15-point lead, with Cleveland able to get no closer than eight points for the remainder of the contest.

“We had a bad game,” Lue said. “We had a lot of shots we didn’t make, fumbled the ball a lot and missed a lot of layups.”

The Cavaliers will remain in Los Angeles as they prepare for their second consecutive game at Staples Center on Sunday night. In that matchup, the opponent will be the Los Angeles Lakers, with tipoff set for 9 p.m. ET.