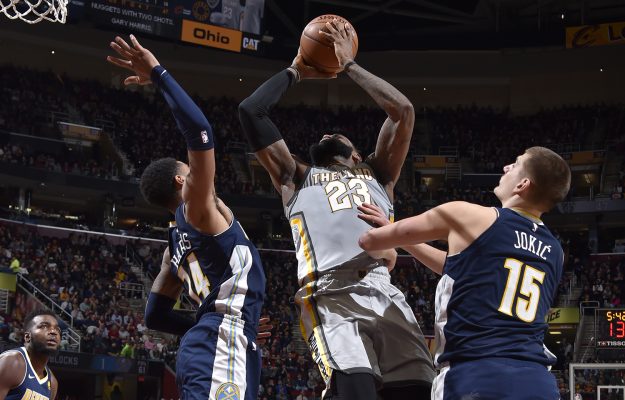 (Cleveland, OH) — Waiting nearly a full three quarters before applying defense proved to be disastrous for the Cleveland Cavaliers as they lost a 126-117 decision to the Denver Nuggets at Quicken Loans Arena on Saturday night.

In the first 33 minutes of action, the Nuggets shot 61 percent from the field and had scored 103 points by the end of the third quarter. For the remainder of the game, that shooting percentage dropped to 40 percent, including a 6-for-20 stretch that allowed the Cavaliers to get within a point at 115-114 with 2:40 left. However, Denver then put the game away with an 11-3 surge.

“We get down by one, we gotta figure out how to get a stop,” LeBron James said after the game.

For the game, the Nuggets hit at a 55 percent rate from the field, which included 19 3-pointers. In addition, they handed out 35 assists.

“They’ve got great shooters,” Cleveland head coach Tyronn Lue said after the game. “They had it going on offense tonight. We threw everything at them, but they were hot.”

The loss spoiled the 13th triple-double of the season and 68th for the career of James, who finished with 25 points, 15 assists and 10 rebounds. All five members of the starting lineup scored in double figures, paced by J.R. Smith, who scored all 19 of his points in the second half.

“He (Smith) gave us a spurt in the second half and got us back in the game,” Lue said.

Joining James and Smith in the scoring department were George Hill with 17, Larry Nance Jr. with 14, Cedi Osman with 13, Tristan Thompson with 12 and Jordan Clarkson with 11. Nance and Thompson combined for 15 rebounds on the night, hauling eight and seven off the glass, respectively.

“They have so many shooters, it was just tough,” Nance said. “They were making it difficult on us all night.”

Neither team bothered with much defense during the first quarter, and even though the Cavs outshot the Nuggets from the field (62 to 56 percent), they found themselves trailing 37-31 at the end of the period. Denver led by as many as 10 points, using solid ball movement and managed assists on all but one of its 13 field goals, while also managing to be more prolific from long-range with four 3-pointers.

“They (3-pointers) went in,” James said about the Nuggets’ success from long-range. “Some of them were open looks, but they shoot the ball very well.”

In the second quarter, the Cavaliers had even less of an answer when it came to defending the Nuggets, who shot 65 percent (13-of-20) from the field during the period. Knocking down four more 3-pointers, Denver matched Cleveland in the assists department during those 12 minutes with eight and took a 73-62 advantage into halftime.

“Tonight, whether they were covered or open, their shots were falling,” Nance said.

For much of the first nine minutes of the second half, the song remained the same, with the Nuggets taking their largest lead of the game at 99-84 with 3:23 left in the quarter. That was when the Cavaliers began a 13-2 run that sliced the margin to four at 101-97 with 57.7 seconds to go in the period, with Denver scoring a basket in the final minute to take a six-point lead into the final 12 minutes.

“I thought we shot the ball consistently, but we couldn’t get stops,” Lue said. “They just killed us and shot the ball well tonight.”

The Cavaliers conclude their homestand with a Monday night matchup against the Detroit Pistons in a game that will tip off just after 7 p.m. ET. Following that contest, the Cavs embark on a six-game road swing, five of those coming against Western Conference foes, with the first of those opponents being the Nuggets on Wednesday night.