Video: Jordan Clarkson Explains Why He Retaliated Against Dario Saric 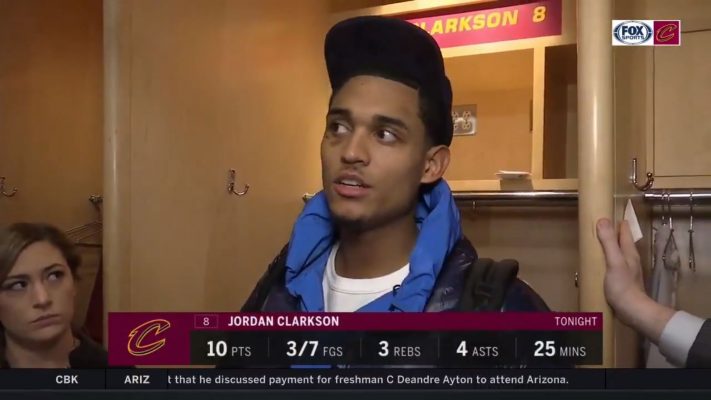 The Philadelphia 76ers were already seconds from winning the ball game with an eight-point margin against the Cleveland Cavaliers on Thursday night. That was when 76ers forward Dario Saric decided to add insult to injury as he ran down the court for a wide-open dunk for a 107-97 lead.

The Cavs’ Jordan Clarkson took exception to the play and threw the ball at the back of Saric. The two had to be separated and the Cavs guard was ejected from the game. One technical foul shot later and the final score was determined: 108-97, Sixers win.

Why would Clarkson create a situation that late in the game?

In a postgame interview, Clarkson was asked if he hit Saric with the ball because he scored with the game already decided.

After his ejection late in the game Jordan Clarkson responds to why he threw the ball at Dario Šarić pic.twitter.com/niHRke1Ta9

“Yeah. Part of the game,” Clarkson confirmed. “If anybody say different, that they wouldn’t have did that, that they’d have did something different, or anything else, they lying. Especially if it was at that play of the game. They know what’s up. That’s it.”

Saric broke an unwritten NBA rule between teams and players. When you have a sizeable lead with the game already in hand and you have the ball with seconds remaining, just dribble out the clock and save the losing team from more embarrassment.

All Saric should have done was run out the clock, not run up the score.

Clarkson is as fiery and competitive as any player and the frustration of losing at Quicken Loans Arena, the Cavaliers’ home court, for the third time in four games was too much to bear.

Saric is from Croatia and he was likely unaware that the rule existed. You could see it from his face after Clarkson threw the ball at him. It appeared that he wanted an explanation why he received that kind of treatment.

Joe Vardon of Cleveland.com shared Saric’s side of the story:

“It was not against the Cavs organization,” Saric explained. “I saw Ben [Simmons] dunk the ball and I wanted to do the same. In one way, I want to apologize to them, because I finished that ball.”

A few seconds earlier, Simmons dunked the ball in the open court but there was no retaliation from anyone.

The Cavs and the Sixers don’t meet again until April 6 when the Wine and Gold visit Philly. We’ll know by then if any bad blood between the players lingers on.